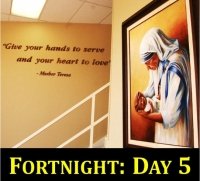 “If we don’t love the poor, and do all we can to improve their lot,” says Archbishop Charles Chaput, “we’re going to go to Hell.”

If that sounds like a harsh way to put it, reread the Last Judgment parable in the Gospel of Matthew, and try to see if Jesus left any wiggle room.

In his first encyclical upon becoming Pope,  Deus Caritas Est (God Is Love), Pope Benedict summed up Christian duties this way: “The Church’s deepest nature is expressed in her three-fold responsibility: of proclaiming the word of God, celebrating the sacraments, and exercising the ministry of charity.”

So far we have recommended only two of those in our suggestions for promoting Catholic identity. Now for the third: serving others.

God sends saints to show the world how he wants us to behave. His message was crystal clear when he sent us Mother Teresa: Serve the poor. Here are several characteristics we should imitate in this great saint.

After all, even self-centered people like the Gospel of Luke’s “Rich Young Man” can fulfill those “thou shalt nots.” But it takes radical change to love like God wants. That radical change is absolutely necessary.

Pope Benedict XVI says it over and over again in his encyclical on charity. “Only if I serve my neighbor can my eyes be opened to what God does for me and how much he loves me,” he writes.   “The saints — consider the example of Blessed Teresa of Calcutta — constantly renewed their capacity for love of neighbor from their encounter with the Eucharistic Lord, and conversely this encounter acquired its realism and depth in their service to others.” Four separate times in the encyclical e recommends imitating Mother Teresa.

In an age that hates hypocrisy, Mother Teresa had no trace of duplicity. She simply loved God above all and others as herself, even when it was hard.

Service for us is often an isolated act, which is fine as far as it goes. The more such isolated acts, the better. But what Mother Teresa modeled was an attitude of service, which is very different.

After author Malcolm Muggeridge spent time with Mother Terasa he asked her what the title of his book about her should be. She told him to name it whatever he liked. He insisted that Mother should suggest a title. After a moment, she said, “Something Beautiful for God.”

She explained: “Every day on awaking, my desire and my enthusiasm is this: Today I must do something beautiful for God.”

That’s a good attitude to ask God for. Throughout the day there are lots of opportunities to “do something beautiful for God” — most of them very small. Remember Mother Teresa’s “Gospel on Five Fingers” (the words of Jesus in Matthew’s Last Judgement, one word per finger): “You did it to me.”

Mother Teresa famously said, “If you judge people, you have no time to love them.”

It’s a lesson my friends and I learned when we volunteered at Mother Teresa’s “Gift of Love”  home in San Francisco in college. We spent our time there chatting (and smoking lots of cigarettes) with men who were dying of AIDS. We were pious Catholic college students — they were homosexual men  active in the gay scene of San Francisco. They had a totally different worldview from ours, but they loved having someone to talk to.

They were startled by the Missionaries of Charity. “I don’t understand these women,” said one man. “They clean our vomit, they clean our [censored!], and they keep smiling. What is wrong with them?”

But at the time I helped out there, the sisters had never had a patient die in their house who hadn’t first asked for admittance to the Catholic Church. Loving service won them over  in ways no harsh judgment ever would. My friend Jack Smith described that experience, that changed us as much as them, here.

Mother Teresa suffered spiritual desolation — the horrifying feeling that God had abandoned her— for an astonishing 50 years. Yet during that time she was known as the “Apostle of Joy.”

How did she do it? I think there are two aspects of her life that allowed her to endure that terrible trial.

First was the nature of her calling. In her private letters published after her death, she described the very personal experience of Jesus Christ she had when she was called to serve the poor in Calcutta. After she agreed, she had a months-long “real, close, intense union with Jesus in 1946 and 1947.” This is the kind of experience of God’s beauty and love that caused St. Thomas Aquinas to declare all his life’s work “straw” and stop writing. Mother Teresa’s months-long experience of intimate union with Christ, renewed throughout her life in Eucharistic adoration, was enough to sustain her for decades.

Second was the nature of her work. It is a paradox that the more human beings try to grab happiness for themselves, the more it slips through their grasp. But the more they freely try to provide happiness for others, the more joy they feel themselves. Mother Teresa, radically and completely, lived her life entirely for others, “giving until it hurts,” and that was enough to fill her with joy.

So, how is all of this relevant for the Fortnight for Religious Freedom?

Mother Teresa herself explained how. At the 1994 National Prayer Breakfast, she urged Americans to live up to our founding principles — by loving.

Not just by heroic love, but by ordinary love. By deciding that in America “no child will be unwanted, unloved, uncared for, or killed and thrown away.”

“Then,” she said, “you will really be true to what the founders of this country stood for.”