“The Bible Made Impossible” by Christian Smith: A Gregorian Book Review 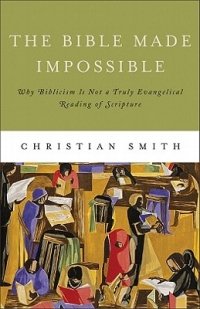 Christian Smith, The Bible Made Impossible:  Why Biblicism is Not a Truly Evangelical Reading of Scripture, Grand Rapids: Brazos Press, 2011.

During the many years I was an evangelical Protestant I never questioned certain beliefs, chief among them the doctrine of Sola Scriptura. That is the belief that the Bible is the sole authority a Christian needs to settle any doctrinal or practical issue. One was not to rely on any creed, church council, or Pope when it came to what Christians should believe. The Bible and the Bible alone provided all the answers. When I began to be drawn to the ancient Church, and then to the Catholic Church, my ideas about Sola Scriptura began to change. I finally admitted that I had, for years, adhered to a belief about the Bible that the Bible itself did not support.  I held to a form of what Christian Smith calls “Biblicism”. In this informative book that is sure raise the ire of many Protestants, Smith, a recent Roman Catholic convert, outlines and traces the history and particulars of Biblicism.

Early on, Smith identifies ten assumptions or beliefs that define Biblicism. These include the belief that the Bible represents the totality of God’s communication to mankind; all the issues relevant to Christian belief and life are contained in the Bible; the best way to understand the biblical texts is by reading them in their explicit, plain, more obvious literal sense without taking into consideration their literary, cultural, and historical contexts; all matters of Christian belief and practice can be learned by simply sitting down with the Bible and piecing together through careful study the clear truths it teaches; and when studied properly the Bible becomes something like a handbook or textbook for Christian belief and living that includes science, economics, health, politics, and romance. (4,5) There are more but these are some that Smith identifies.

The glaring problem with this kind of approach to the Bible, Smith points out, is that many Biblicists cannot agree on what the Bible teaches about many issues like baptism, the nature of Holy Communion, the nature of the Church, etc. Smith uses subsequent chapters to point out the errors of Biblicism, pointing out that historically the Bible has been interpreted differently from different eras of history.

Ultimately Smith argues that Biblicism is an attempt to control and domesticate Scripture rather than opening ourselves up to be shaken and altered by its message. This, Smith believes, is a direct result of modernity and the Enlightenment which is ironic given American evangelicalism’s disdain for modernity (149). His conclusion is harsh, “Rather than the Bible challenging rational and universal foundationalism as a misguided project, the Bible itself started to be defended on the very grounds that it successfully met the independent  foundationalist criteria for reliable truth, based on the theories of its plenary inspiration and inerrancy. Without realizing it, evangelicals embraced a view of scripture that was more driven by Cartesian and generally modern preoccupations with epistemic certainty than by scripture itself and a long Christian tradition of scriptural interpretation.” (151). Smith suggests that a great deal of evangelical Biblicism is driven not by gospel concerns and scriptural self-attestation but by modern preoccupations with the certainty of knowledge which was intellectually doomed to fail from the start. The sad result will be that the Bible will continue to be misused and the gospel poorly expressed.

Smith’s book gives Catholics a lot to consider to better understand where modern day evangelicals are coming from. Do Catholics want to advance the New Evangelization among the “separated brethren?” Do they want to see more converts zealously promoting Catholic identity in public life?  They should read this book.