The Church is Not a Building? Catholicism, Sacred Place and Storied Architecture 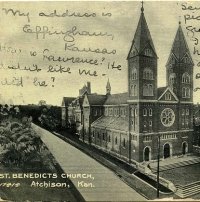 Growing up an evangelical Protestant, I always heard people say, “the church is not a building.” True enough: the Church — visible and invisible — is comprised of “people whom God calls and gathers…who through faith and Baptism have become children of God, members of Christ, and temples of the Holy Spirit” (CCC I.751). Yet this recognition that the Church is comprised of human persons has not altered the Catholic Church’s historic commitment to the sacredness of place. While the Church is not a building, our greatest Popes, saints, and theologians have taught us that buildings are vitally important to the Church — and to the preservation of our humanity.

Even those who are not in full communion with Rome recognize this wisdom. In his book, A Christian Theology of Place, Anglican theologian John Inge warns both Christians and society of the consequences inherent in a loss of a sense of place — particularly sacred place. Responding to what he argues is post-modern society’s shift away from the classical Greek recognition of the significance of place to the Western intellectual focus on space and time, he argues that too few voices in academia appreciate the importance of place. Inge believes the neglect of the importance of place will have — and already does have — a dehumanizing effect on people, since there is an intimate connection between our personhood and our environment. (We were, after all, created from the dust of the earth.) To combat these effects, Inge constructs a Christian theology of place drawn from personal experience, scripture, and Christian tradition.

Since it is written primarily for a Christian audience, A Christian Theology of Place focuses on the problems Christianity experiences as a result of the devaluation of place. In particular, he notes the widespread demise of good church architecture that communicates the glory and the holiness of God. In the past, Inge argues, the church building was understood as a place for expressing the character of God. The building itself, like all of creation, was meant to help human beings know their Creator. Influenced by non-Christian and post-modern thought, however, many Christians — most notably, of the Protestant tradition (though many Catholic parishes have been affected) — have forsaken or neglected this notion and purpose of place.

Instead, the building is now understood as providing people an opportunity to be located together in space and time.

Along with this, Inge makes the distinction between Catholic and Protestant views of place. Even though Inge is Anglican, he recognizes that Catholicism maintains a theology of place that is much more consistent with Christian belief at all stages in its history.

Historically, Catholics understand that place is the context for the events of our existence, the story of our lives. Sacred place, Professor Belden Lane of Saint Louis University has argued, is “a storied place.” Thus, local Catholic churches are “storied” buildings; the architecture is very often cruciform — reminding those inside of the story of Jesus’ death on the cross. The stain-glass windows depict great saints and great stories from the Bible, reminding those inside the church that they are part of a grander narrative of human existence.

In contrast, many Protestant Churches since the Reformation (especially in Anabaptist and other low-church traditions) have stressed the utility, functionality, and practicality of a church building. This is seen as some sort of return to the purity of Biblical times, when the early disciples of Jesus were satisfied meeting in caves and houses. But, in Inge’s thinking, it is a denial of firmly established biblical principle that place is important. It is meant to mediate the sacred character of our Creator and, as such, to help promote a healthy relationship between God and humanity. Denial of this is “a final capitulation to modernity” (178)

So, the church is not a building? As we have learned, there is a truthiness in this statement that has led to error. In contrast, Mother Church has — throughout the ages — affirmed the sacredness of place, mandated the construction of “storied” buildings that communicate the greatness of our Creator, and so protected the dignity and meaning of our humanity. Let us be thankful for her wisdom and, in our local diocese and parishes, do everything we can to preserve and promote it.

Vaughn Kohler is a former Baptist pastor who entered the Catholic Church at 2011’s Easter vigil.   Currently the social-media specialist at Benedictine College in Atchison, Kansas, Mr. Kohler is completing an M.A. in English from Kansas State University.