The Riddle: A Student’s Catholic Musical 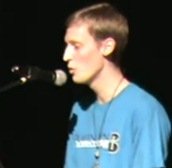 A student at Benedictine College  wrote, produced, directed and starred in a musical that features guns, swords, great original songs, and the faith. Healey told the school paper that he calls the play “God’s play” because it is providential that the play has been staged at all.

“In late January [2011], I lost all of the resources I had been counting on, and I was faced with two alternatives: either I had to trust in God to provide everything I needed, or to fail trying to push forward on my own steam. I came to see that unless God willed my play to be a success, it was doomed to failure, but that if he willed it to be, nothing could stand in the way,” he said.

With all his resources gone, “I put the play in his hands and said, ‘It’s your play, Lord. Your will be done,’” Healey said. “Within two months, everything that I had desired came out of nowhere, we performed a three-day run for over 350 friends and family, and the funds we had provided out of pocket were completely paid for by donations, so that the whole production was a tremendous success.”

Healey, who is from Oklahoma, has always enjoyed musical theater.

“This was an amateur — from the Latin amare, to love — production,” says Healey. “As an amateur production, mistakes, tech issues, faults on the part of the creators, directors, cast and crew come as part of the package. I appreciate the criticisms I have received, both positive and negative, because I want people to engage in a dialogue with the play, not simply to enjoy it and then dismiss it from their minds.”

Why do audiences like my children and their friends enjoy it so much? Because of a key decision Healey made: “I wanted to have both guns and swords,” said Healey. “So I picked a time period and folded that into it.”