The State Has Not the Competence 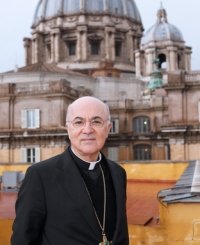 My wife and I met there and were likely one of the very first couples married in the Sacred Heart Church who were both graduates of ND since women had only recently been admitted to the degree programs. Sadly, the Archbishop felt the need to sound an alarm reminiscent of the forthright and challenging comments of Benedictine College President Stephen Minnis written recently for the Gregorian.

To his credit, Archbishop Vigano did not mince words on the Notre Dame campus . With chilling precision, Vigano warned  that “Evidence is emerging which demonstrates that the threat to religious freedom is not solely a concern for non-democratic and totalitarian regimes.” In an earlier posting for the Gregorian I tried to suggest to our readers that the Cristero rebellion in Mexico and the brutal repression of the government in a nominally Catholic country was a cautionary tale for the United States.

The Cardinal noted that a number of influential Catholic “public officials” as well as “university professors” are opposed to the fundamental “critical” Church moral teachings like abortion, population control, the sanctity of marriage, embryonic stem cell research , and single-sex adoptions. Some Catholic intellectuals prefer to hide behind the “I am personally opposed, but I can’t impose my morality on others,” dodge. If they are personally opposed to perjury, are they able to support laws against it lest others might feel lying under oath is just a personal matter between the liar and the Lord? After all, I can imagine hearing, “who are we to judge?”

Also, most of this is hidden under the smoke screen argument that in a multi-cultural secular society, Catholics need to be “pragmatic.” Other political scientists and public office holders who proclaim themselves as “realistic” Catholics simply disregard these issues, labeling them emotional (wedge) issues that divert from other more “important” issues. President Minnis and Archbishop Vigano are sounding a serious and long overdue alarm. Kudos to them both!

Vigano noted that “young students” at Massachusetts public schools are required to take courses that present same sex relationships as “natural and wholesome.” Parental requests to exempt their children from these classes were summarily rejected by public official despite the parental objections that the classes were “morally unacceptable.” The archbishop lamented that “religious freedom was forcefully pushed aside once again.”

We do not have to immediately anticipate the kind of severe religious persecution that is being witnessed in China, Africa, and all over the Middle East today. Churches are not being torched, worshippers are not being imprisoned and lives not being lost.

Still, there are those who would have citizens renounce their beliefs in many public policy areas if they are to advance in the political arena and in their careers. Social service agencies and faculty in educational and social services disciplines have been told that if a student for conscience reasons will not give all the options to on abortion to at-risk teens, they will not be able to serve as interns. Their moral objections cost them a career, advancement and even advanced degrees. Vigano also wonders aloud how public officials can stay in a party in which intrinsic evils are being celebrated as secular sacraments.

In scriptures, we are reminded that what God has joined together, man must not divide.

In the area of religious freedom Archbishop Vigano put it this way, “What God has given, the servant state does not have the competence to remove.” Sadly, without prayer and reflection, the United States, the most nominally religious nation on earth, is, as former Judge Robert Bork put it “Slouching towards Gomorrah.” Persecution begins, sadly, in Vigano’s words, with “reluctance to accept the public role of religion.”