The Storm That Spoke to Father Spitzer 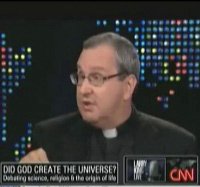 At Our Sunday Visitor, I interviewed Father Robert Spitzer. Gregorian readers know him as the Jesuit with the physics-savvy new proofs for the existence of God. The former president of Gonzaga University also holds degrees in accounting, theology and philosophy — and has founded seven national organizations.

The occasion of the interview is his new book: Ten Universal Principles: A Brief Philosophy of the Life Issues.

“She said, ‘It sounds like it’s the most important theory to you.’ “I said, ‘Well, you’re right. I think this is what life is worth living for.'”

He also shared the story of his “call,” which came as he was stuck in the rain under an eave on the way to his accounting work.

“It was a very juvenile sort of thing to do. But I said: ‘OK Lord, I am stuck here. If it keeps raining like this I’m going to be just drenched. I won’t be able to go to work. I’m going to have to go back to campus anyway, but I’ll tell you what …’

“I said, ‘If it stops raining in the next three minutes I will go to Father O’Leary’s office at Gonzaga, and I will apply for the Jesuits. If it keeps on raining, I’ll go back to the house and change my clothes and drive to work.’

“Three minutes later, the rain just stopped. I kid you not.”

He was a delight to talk to, a true Jesuit and a true sign of hope. Go and read for yourself.