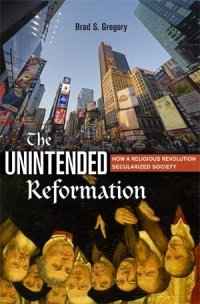 How is it that we have come to live in a culture where religious belief has been relegated to the “private sector” and even to the realm of a “personal preference”? Why is serious Catholic interaction with society becoming increasingly difficult as society becomes more and more secular?  Dr.Brad S. Gregory, professor of history at Notre Dame, believes he has discerned what has brought us to this situation today. The answer goes back to the Reformation and its aftermath.

In The Unintended Reformation, Gregory argues that prior to the Reformation the Catholic Church offered Western Civilization a solid, unified worldview that addressed all facets of life.  And, contrary to popular belief, the Catholic Church was not a dead monolithic monster. True, it was in need of reform; but regardless, there was a great deal of vibrant Christianity being practiced all over the known world.

When the Reformation occurred, the entire applecart was overturned. Initially, the first generation of Reformers (Luther, Calvin) strived to reform the Catholic Church. But subsequent generations of Reformers moved far away from the original vision of Luther and Calvin. The increase in the number of Christians committed to Sola Scriptura, the doctrine that the Bible alone is the final authority for each believer, brought great complications to Christianity. Hundreds (and then thousands) of Protestant denominations sprang into existence as a result of differing interpretations of Scripture; and many of those same denominations experienced internal dischord and split over a whole variety of subjects. All the while, each group claimed that the Bible had led it to the truth.

Gradually, as the Reformation spread throughout Europe, the governments of different Nation-States found it necessary to try to control the churches. Gregory argues that this came about because Protestants could not decide amongst themselves what was true, essential, or necessary—and that governments wanted put a stop to religious wars. Thankfully, freedom of religion emerged from this difficult situation and, while governments set varying restrictions on Christians of all kinds, believers were more or less allowed to practice their faith—or their particular interpretation of it.

As these developments were occurring, philosophers began to reject the idea that religion could contribute to an understanding of reality. (Fair-minded scholars were no doubt put off by the poor witness and discord of what should have been a unified Christianity.) Religious beliefs were soon relegated to one’s private life and were not considered for serious study.

Gradually religion got pushed out of the public square as secularization began to become the predominant force in culture. Thus the secular society was born.

This is what Gregory calls the “unintended Reformation.”

This small review has only touched briefly on Gregory’s thesis; however, in his book, he presents a tremendous amount of evidence to argue his point. Certainly, the book challenges many settled Protestant notions about the Reformation and its effects. In addition, Gregory’s fresh perspective could challenge Catholics to look again at the past in order to understand the theological landscape of contemporary Protestantism; this knowledge, in turn, could serve to advance ecumenism and evangelization. (For instance, open-minded Protestants might come to understand the damages that have been wrought by the practical application of Sola Scriptura—and might thereafter “come home.”)

Above all, The Unintended Reformation is a valuable resource for calling Western Civilization back to the great truths of Mother Church.