The ‘Wife’ Papyrus and the ‘Who’s-to-say?’ Jesus 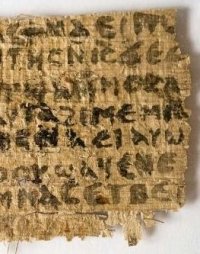 How often does papyrology (the study of ancient texts written on papyrus) make headlines? Probably about as often as Jehovah’s Witnesses knock on Catholic rectory doors. More on that in a moment.

Papyrology is all the buzz this week, because of a fourth-century text written on a mini-index-card sized scrap of papyrus.

If authentic, and it seems to be, it provides evidence that some ancient Christians believed Jesus had a wife. The fragment belongs to an anonymous collector who invited Harvard Professor Karen King, an expert in ancient languages and papyrus texts, to translate it.

The text is written in Greek characters, but the language is Sahidic Coptic, a dialect spoken by Christians in southern Egypt during the first centuries of Christianity, whose descendants form the Coptic churches still in existence — and still fighting persecution — today.

Four words of the text are causing the all the commotion, because Jesus refers to his “wife” (whom he names as “Mary”) and says she was a disciple. It is certainly fascinating that such discoveries are still made, and one has to admire those who chose papyrus specifically because of its staying power. Not many of our modern books will still be legible two millennia from now.

But that is where the discovery seems to end. Scholars have known for years that there was a tradition in some circles that Jesus had a wife. We know that many accounts of his life were written, and that some have him sliding up and down moonbeams and other fantastic feats. What Dr. King has unveiled is merely textual evidence of such a tradition. To her credit, because she is a great scholar and an academically honest one, she is not claiming anything further than that.

All the same, the story reminds me of a story I once heard about a time when some Jehovah’s Witnesses knocked on the door of a Catholic rectory, and the priest, who had just come in from a hike and was in a golf shirt and khaki pants, served them coffee and listened to their presentation? After hearing them out, he presented his own well-schooled version of salvation history.

It conflicted with the Witnesses’ account on several points. One of the Witnesses, seeing that there were no converts to be gained at this house (did they notice the large Catholic church next door?) tried to end the meeting by saying, “Well, you believe that and we believe this, who’s to say who is right?” The priest simply replied, “Do you think Jesus Christ came to this earth, went through what he went through, suffered what he suffered, and then left it up to Who’s to say?”

He went on to explain what Catholics believe about the Church and about Christ’s Vicar on earth. And it made sense not because of some random divine decree, but because no one with any smarts at all would leave things up to a fumbling bunch of fishermen, if he had the power to guarantee that his message would be delivered correctly … not just by them, but through them, and even in spite of them. The Jehovah’s Witnesses promptly left before the priest enrolled them in RCIA.

Dr. King’s papyrus teaches us what we already know. Some Christians believed Jesus had a wife. Catholics know that already: Jesus had, and has, a Spouse.

St. Paul speaks of Christ giving himself up for the Church as a man sacrifices himself for his wife. Well, one of the gifts Christ’s sacrifice gave the Church, the Spouse of Christ, is the gift of the Church’s teaching authority, her Magisterium.

Those who deny the Catholic Church because they rely, like Martin Luther, on “Scripture alone” forget one very important fact: Without the Church there is no Scripture. Without the Church in those early centuries, all we have are conflicting accounts of married Jesus or moonbeam-dancing Jesus. All we have is “who’s-to-say?” Jesus. It was the Church, through the unfailing assistance of the Holy Spirit, who discerned which “gospels” were true and which were not. It takes divine inspiration to recognize divine inspiration. The fact that we have the New Testament presumes the existence of a Church with divinely-inspired teaching authority.

There is a beautiful though subtly ironic truth in the fact that Jesus’ wife, a claim that the Church rejected as false when Dr. King’s papyrus had fresh ink, points toward Jesus’ Spouse, a Church given a tremendous gift, a gift purchased by Christ’s sacrifice on the cross, and a promise that He will be with us, even to the end of the age …