‘Tis the Season to be Tolerated 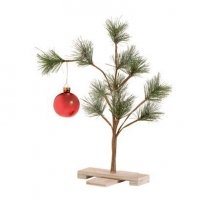 Leading up to Christmas, every year we see more stories about Christian symbols being banned or activists protesting about “religious” symbols, on public or even corporate property.  Just this week, some California nursing home residents lost their Christmas tree because, as a “religious symbol,” it was held to be inappropriate in a common area.

Whether or not Rhode Island’s State House has a “Holiday Tree” or a “Christmas Tree” is not the issue. The issue is a gross misunderstanding of the very notion of tolerance, and the portrayal, under the guise of tolerance, of what is in truth persecution.

There are people who do not want to see religious symbols. They want them gone, banned from public display, where they will not see and be offended by them.  They claim this in the name of “tolerance.”

Interestingly, one cannot tolerate something unless it is burdensome.  The Latin word behind or word “to tolerate” implies bearing a burden.  One does not tolerate winning the lottery or getting a job promotion, one rejoices in it.  One tolerates foot blisters,  harsh weather, or even the eccentricities of a neighbor.

So, to wish to eradicate Christmas trees and other religious symbols is done not as an act of tolerance at all. Those who do so are unwillingly to put up with the minor burden of other people’s public displays of religiosity.  They act as if second-hand prayer were as harmful as second-hand smoke.

Now, the wish to stomp something out (in this case, the public expression of religion) is not tolerance. In fact, religious displays in particular are targeted, and the law is invoked (the misreading of the separation of Church and state is for another post) in order to suppress what has long been considered legitimate self-expression.

Although not physical hostility,  to take away from a group of elderly people a holiday tradition they consider essential, for no real commanding reason, is emotionally hostile. It is certainly ill-treatment.  And “To seek out and subject (a person, group, organization, etc.) to hostility or ill-treatment, esp. on grounds of religious faith, political belief, race, etc.” is the Oxford English Dictionary’s definition of “persecute.”

As our nation becomes more and more secular protecting the public square from religious expression is being seen more and more as a duty of the state. Religious expression is being confined to an ever narrowing circle.  I have no doubt but that this will continue in the future. It will become more emboldened by the public perception that this is done in the interests of tolerance and fairness.

The Supreme Court may interpret the law, but the dictionary still defines words. Let’s begin to call this what it is: religious persecution.

PS:  The ultimate struggle between tolerance and Christmas trees is Charlie Brown’s own sorry sapling which could hardly bear the burden of a bulb. As almost everything in America, replicas are available…