Victory Only Comes Through the Cross 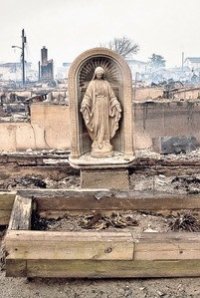 A photo of Sandy’s aftermath: an icon for faith after 2012’s pro-family losses.

An election like yesterday’s can cause a great deal of discouragement. The results were practically a worse-case scenario for the most fundamental building blocks of society: The right to life, religious liberty and the family.

But don’t forget that Jesus Christ has only one modus operandi: The cross.

His story starts with his birth into the life of a refugee one step ahead of a murderous king. It ends with him being dragged away from his fleeing apostles and crucified.

After that came a Church whose fights and sins are the subject of the letters of St. Paul. Then came torture and martyrdom for his followers — followed all too quickly by the long march of heresies that denied the very identity of Christ. Around the year 1000, the Church was torn apart by human pettiness in the Great Schism. About 500 years later, an overbearing, arrogant and worldly Church would get torn apart again and again.

Over the years, powerful Catholics have advanced or allowed terrible evils that the Church’s teaching denounces: simony, slavery, and various other atrocities, up to and including genocide and abortion. From Peter’s betrayal to Pope John XII’s, from the days when Judas sold Christ to the days when Catholics sold slaves, the Church’s story is a long, sick tale of sin.

But, as I have written before, the Church isn’t the sum of its failures and sins. The Church is the sum of its sins plus grace, which is to say it is an institution always being dragged back from the brink of failure and handed victories by God.

It also means the real history of the Church is the history of saints and charity. At each stage in that story of sin, the Church was also a multinational organization transforming the world through love. We invented hospitals, schools — and science, and principles of human justice. We created works of stunning beauty with pens, brushes, chisels and musical instruments. Our scriptures and our sacraments built families that brought cheer and comfort to a world that had often lacked them.

We may feel like the forces of secularism have finally triumphed in America.

The reality is far from that.

Just ask Pope John Paul II what it looks like for the forces of secularism to triumph. His nation was overrun by murderous Nazis — only to be replaced by Communists for decades.

Or ask Pope Benedict XVI what it was like to live under aggressive secularizers — Nazis euthanized his Down Syndrome cousin and his family had to move several times because his father opposed them. The Nazis were replaced by a new Germany that before long would deny the unborn the right to life and succeed in marginalizing the faith.

What lesson did these two great men learn from watching the constant triumph of secularism over Catholicism in their time?

“We can and must believe, with the late Pope John Paul II,” Pope Benedict XVI told Americans in 2008, “that God is preparing a new springtime for Christianity.”

If that sounds naive, remember who is saying it.

It is absolutely providential that this Election Year is also the Year of Faith. The Pope and the bishops have called for us to do what every other generation of Christians has done: Turn to Christ in our hour of need, and carry his cross to victory.

Christ’s modus operandi is always the same: He loses battles, then wins wars.

The Gregorian Institute listed what needs to be done during the Fortnight for Freedom. This is basically the agenda of the Year of Faith.

And the Year of Faith just got a lot more serious.