Who Would Aquinas Vote For? 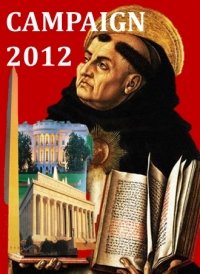 As Americans endure another year of the presidential election machine that has been in motion for months already, we look for stability among the flux, and sanity amidst the madness. The well intentioned among us shake the dust off of our Burke, Kirk, and Neuhaus volumes (or, I suppose, your Jimmy Carter and Intergovernmental Panel on Climate Change Report, if you’d prefer) and seek wisdom.

At the beginning of Summa Contra Gentiles, Thomas Aquinas gives us a definition of wisdom from the “usage of the multitude” of ancient Greece that seems especially appropriate for today: “[it] has commonly held,” he says, “that they are to be called wise who order things rightly and govern them well.” Aristotle says that, “it belongs to the wise man to order.”

At the bottom of the apocalyptic-like headlines of global daily newspapers is a failure of wisdom as it is defined here; a total lack of ability of the world’s leaders to “order things rightly and govern them well.” Here’s a quick rundown (if you’ve forgotten): America’s fiscal problems—an inability to order our budget; Greek riots—an inability for youth to properly order their souls; European debt—an inability to order a continent’s finances; and on it goes.

Aquinas refers to this definition of wisdom as “the office of the wise man”. Wouldn’t that be a great reply to one of the questions in the endless debate cycle? “Well Mr. Blitzer, I decided years ago that before I sought national office, I would seek election on a more local level, and so I was elected to the office of the wise man. My administrations’ number one priority will be to implement policies that I believe are worthy of this office of the wise man.” Can’t you just hear the stunned silence? (“I’m sorry but did that candidate just say that with a Yoda accent?” one man would whisper to his wife.)

“Not going to do it! Wouldn’t be prudent!” Who can forget Dana Carvey’s impersonation of George H.W. Bush during his presidency? But how refreshing it would be for politicians to consult prudence before writing and passing legislation. How we long for our leaders to show some prudence in dealing with the problems of the day! As our country continues to debate (and impose) the fiscal and ethical policies that will determine our freedom and well being, we must remember that no matter the shape of current events, wisdom is eternal. We should continually keep before our minds what it would mean for our leaders to show wisdom. What better compliment could a politician receive from a constituent than, “If there is one thing about you, it is that you know how to order things rightly and govern well”?

Cynicism and despair are understandable responses to the baffling complexity of the conditions of world affairs, but ultimately, too facile and too easy to default to. Rather, we must respond as Aquinas does to the monumental task that he has set before himself at the beginning of the Summa Contra Gentiles:

“And so, in the name of the divine Mercy, I have the confidence to embark upon the work of a wise man, even though this may surpass my powers, and I have set myself the task of making known, as far as my limited powers will allow, the truth that the Catholic faith professes.”  Or, to use the words of Hilary: “I am aware that I owe this to God as the chief duty of my life, that my every word and sense may speak of Him.”

Mark Wampler is a graduate student in philosophy at the University of Dallas in Irving, Texas. He has a degree in journalism and has written for several newspapers and magazines. Reach him at: mark@mwampler.com