Witness to Healthcare: An Interview with Dr. Kasia Szymanek 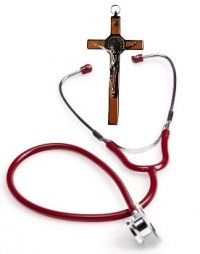 When did you discern a vocation to the medical field?

I am the only daughter of Polish immigrants. When my mom was pregnant with me, we were living in Germany at the time, and she was having some difficulty with the pregnancy. At one point, she got up from her hospital bed and, all of a sudden, she fainted, fell on the floor, and started bleeding profusely

A young German doctor rushed to her aid, swept her up in his arms, carried her to the emergency room, and performed an operation that saved her and me. I’ve known that story most of my life — and maybe that’s why I’ve always sensed God calling me to serve as a doctor.

Thanks to the HHS mandates, contraception is a regular part of our national conversation. People are often surprised and confused that the Church is against contraception. What do you think is the best way to approach those conversations?

Archbishop Timothy Dolan (NY) talks about the importance of practicing “Affirmative Orthodoxy.” In other words, people should know what the Catholic Church is for, not what we’re against. And what the Church is for is creativity and life.

I think we should try to help people understand that our ability to create and promote life—to procreate—is central to our humanity. God created the universe and “saw that it was good” (Genesis 1:31). When we exercise the power of creativity (within the God-ordained institution of marriage) to have children, Catholics believe that is “very good”—and good for them. It is living how human beings were meant to live.

Conversely, when we use contraceptives to shut off or fiddle with our power of creativity, when we put chemicals in our bodies that do violence to the natural, God-given order of things, and—worst of all—when we take drugs or undergo procedures that actually harm or take human life, that is not good for us. It is an attack on our humanity. It is doing harm to ourselves.

So, it’s not being against something as much as it is being for life, for the maximum enjoyment of our humanity.

The truth is, most people (including many Christians) have not even heard the cogent arguments against the use of contraception.  I don’t have time to go into that now, but Dr. Janet Smith of Sacred Heart Seminary in Detroit gives a wonderful presentation called “Contraception:  Why Not?”  I encourage people to check it out–and thoroughly research the issue.

The Church condemns the use of “The Pill” and other forms of contraception; however, provided couples are always “open to life,” they may ethically regulate their fertility. Of course, this is called Natural Family Planning. You have been trained in the Creighton Model Fertility Care System. Tell us a little bit about that—how it works, its effectiveness, and the benefits it provides.

Too often people hear the term “Natural Family Planning” and roll their eyes with skepticism. This is either because they used an outdated, ineffective version of it, such as the Rhythm Method, or they weren’t properly trained to use it.

The Creighton Model takes a little effort to learn, but once you do, it is 98.6% effective. It works by having the woman observe her mucus and from that being able to exactly tell when she’s fertile. Then the couple either uses the days of fertility to achieve pregnancy or the infertile days to avoid pregnancy. Its benefits are that it’s inexpensive, women gain an intimate knowledge of their bodies, couples grow closer, and their intimacy deepens.

And, of course, since the Creighton Model works within the framework and design that God himself built into our bodies, the Catholic Church considers it ethical.

Every area of life comes with its challenges and trials, but the medical field seems replete with so many of the critical battles the Church must fight: for instance, abortion, stem cell research, contraception, and euthanasia. How do practice medicine and remain a faithful Catholic?

With prayer and the sacraments. I frequently ask for the intercession of St. Gianna, an amazing physician and Saint, to teach me how to see Jesus in all of my patients. It is also very important for me to network with other faithful Catholic physicians who encourage me and set amazing examples for me.

Also, I try not to assume that people are out to get me — or trying to persecute me. I try to think the best of them and give them the benefit of the doubt. If you go around being paranoid and defensive, you aren’t going to be a good witness for Christ. So, I try to be gracious, unassuming, and as cheerful as possible.

What final words of advice would you have for someone discerning a vocation to the medical profession?

There is a huge need for faithful Catholics in the medical field who can change the culture of medicine. If God is calling you to battle on these front lines, get excited! Be not afraid — if he calls you to it, he will lead you through it.

If you have any further questions or comments for Dr. Szymanek, feel free to contact her at write.kasia@gmail.com.