An Irish Wish, Little Thunder, and the Palm of His Hand 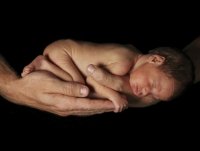 My mother’s side of the family hailed mostly from Tipperary (Balle Viste, Emly) in Ireland. As children (there were nine of us) we were regaled with fanciful Irish tales and learned the prayers that had been passed down from generation to generation in the Murphy clan. One of my most cherished Irish poems/prayers was the Irish Wish.
May the road rise to meet you
May the wind be always at your back
May the sun shine bright upon your face
The rains fall soft upon your fields
And until we meet again
May God hold you in the palm of His hand.

What a poignant reminder it is of God’s Divine Providence, “May God hold you in the palm of His hand.” It always conjures up in my mind the idea that God loves each of us personally. He isn’t a divine clockmaker or someone who loved His creation as a whole, but an Abba which in the Aramaic translates best as Daddy.

The image came home to me even more forcefully in the last month when our newest grandson, Jack James Newman, came to stay at our place for a while since his mother (our daughter Gloria) was taking Family leave to help and her husband Pau was studying for his medical boards. Half in jest, I had taken to calling him Thunder because of his name. Jack is a derivation of John.

His two names were the names of the two brother apostles, and sons of Zebedee, John and James whom Jesus called Boanerges, the Sons of Thunder. In the daily Mass scriptures this week, the readings told the story of Jesus attempting to find accommodations for the night in one place but was met with opposition from the Samaritan villagers, simply because His destination was Jerusalem. The Jews despised the Samaritans and the feeling was mutual. They did not even speak to one another.

Most of us can remember Jesus spoke to the Samaritan “Women at the Well” in violation of such taboos. When the disciples James and John saw this, they asked, ‘Lord, do you want us to call fire down from heaven to destroy them?’” (Luke 9:54). They probably meant lightning, which of course leads to thunder. Their Lord deserved more respect and those who did not provide it deserved punishment. Jesus told them to just move on. What a grace it is when scriptures encourages us to get over insults and slights and move on with our lives.

Our Grandson, little Thunder, will have to grow into his nickname. We know well that he is a fighter since he was born a month premature weighed a bit over five pounds, and had issues that cause him lots of pain at times. We noticed the other day that when Jack was hungry or needed to burp or a new diaper, he looked directly at us as he cried. It seemed to us he was saying are things going to be like this all the time. You are going to take care of this, right? If nothing else, babies lack perspective. Still, he realized that we would help him if he cried out as we held him in the palm of our hands.

When he was finished being fed and treated to a clean diaper, he loved to crane his neck to take in all the new things in his surroundings. Bright lights are his favorite. He would sift around with joyous abandon fully confident that he was in good hands.

It dawned on me that that was what the Lord was getting at when he commented in a number of instances, “unless you become as children, you shall not enter the kingdom.” How tempting it is not to say thanks to God for the blessings and dwell on the evils that befall us and the pain we must endure. American society seems to be moving away from God in part because he is not an instrument of instant gratification who shields people from all suffering. Like baby Jack, we lack perspective. God, by contrast, who sees the big picture knows what we need in the larger context of eternal life. Sadly, too many of us forget that we are made in the image and likeness of God. We seem to prefer to try to make God into the image we want him to be.

My hope is that we will have the humility to realize whether we are praying or not God still holds each of us in the palm of his hand.