Are We Catholic Americans Or American Catholics? 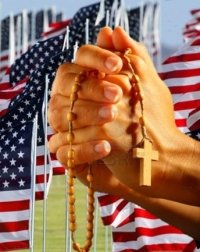 Today there is a great emphasis upon the New Evangelization.  God wants His person and His message to be brought to every man, woman and child. And God chooses to work through many human instruments, like Paul and Barnabas, like you and me.

There is a real problem with Evangelizing that we must deal with.  Russell Shaw explains this in his book, American Church: the Remarkable Rise, Meteoric Fall and the Uncertain Future of Catholicism in America. The problem is this. We are both Catholics and Americans.  But can we be both fully Catholic and fully American? Is it possible to remain faithful to the person and teachings of Jesus, as found in the Roman Catholic Church, and still feel comfortable in our attempt to accommodate ourselves completely to the dominant American culture?

We are to carry our Faith everywhere, and bring it to bear upon everything that we do.  This means we are to engage the American culture with the values of the Gospel.  We are not to allow ourselves to be absorbed into the dominant culture, at the risk of watering down our moral principles and deeply cherished beliefs.  Our loyalties belong first to God, and only secondly to any human organization. We are Catholic Americans, not American Catholics.

How has that worked out in the recent past? Since the Second World War there has been a steady erosion of loyalty to the values and teachings of the Church. At the same time, many Catholics have allowed the dominant secular American culture to dominate their values and decisions.

Some examples illustrate this.  We know that Jesus strongly condemns divorce. But Catholics today imitate the American culture with a 50% divorce rate. We know that the Church condemns contraception and sterilization as completely contrary to God’s plan for spousal love. Yet Catholics imitate the secular culture with an 85% rate of contraception and a 40% rate of sterilization.  In our country there are fewer and fewer marriages. That is reflected in the 63% drop in numbers of Catholic marriages over the past 40 years.  God condemns abortion as a horrible crime, but many Catholics vote for pro-abortion candidates, as though this were an insignificant matter.  The U.S. government is now crossing the line drawn by the 1st Amendment, dealing with the free exercise of religion.  Think of the recent efforts to force religious organizations (Catholic hospitals, colleges, and charitable organizations) and private businesses to comply with the HHS mandate, compelling them to offer free contraception, sterilization and abortifacient pills to all their employees.

Brian Benestad, in his book Church, State and Society, summarizes some of the subtle, but real, deviations that liberal democracy has injected into American Catholics. He says:  “In sum, liberalism tends to promote individualism, the separation of rights from duties, the loosening of commitments in families and at work, undue sympathy for the principle of autonomy and the ‘culture of death,’ more deference to reigning opinions than to Church teaching authority, the reception of revealed religion as opinion, and understanding morality more in terms of rights and values than virtues” (p. 435).

Francis Cardinal George, in his book The Difference God Makes: a Catholic Vision of Faith, Communion and Culture, sums up the overall situation (p. 181): “We have to recognize what we are up against.  The world is both friendly and unfriendly, both holy and demonic.  The world will welcome some of our criticisms and will do everything it can to contest others.  When we hear the demands of the world, which we have to hear, lest we fail to attend to the signs of the times, the great missionary challenge then is to discern what the Church must adapt to and what is incompatible with the faith.”

Clearly, loyal Catholics who wish to be part of the flock that hears the voice of Jesus, its only pastor, must be able to discern between what is true and authentic, and what is false and counterfeit in the dominant secular American culture.  Loyal Catholics, like the loyal flock, must strive to create its own subculture where it can live, and defend, a high Catholic identity.

Catholic Americans must take a fresh, creative look at the role of the laity.  The greatest failure of the post Vatican II Church, Cardinal George says, has been a failure “to call forth and form a laity engaged in the world politically, economically, culturally and socially, on faith’s terms rather than on the world’s terms.  If perhaps we paid less attention to various Church ministries, and more to its mission or purpose, then we might recapture the sense of what should be genuinely new as a result of the Council” (George, Difference, 180).

Shortly before the Conclave that elected Cardinal Jorge Bergoglio the new Pope, the then Cardinal Bergoglio gave a speech on Evangelizing Implies Apostolic Zeal.  He said: “Evangelizing pre-supposes a desire in the Church to come out of herself.  The Church is called to come out of herself and go to the peripheries, not only geographically, but also to the existential peripheries: the mystery of sin, of pain, of injustice, or ignorance and indifference to religion, of intellectual currents, and of all misery.

“Put simply, there are two images of the Church: the Church which evangelizes and comes out of herself … and the worldly Church, living within herself, of herself, for herself.  This should shed light on the possible changes and reforms which must be done for the salvation of souls.”

As I pointed out this past Good Shepherd Sunday, all this should remind us that Jesus is our Pastor, and we are his flock.  The flock knows the voice of the Pastor and they follow him.  Jesus leads his flock to eternal life.  He and the Father will protect the flock, but this does not mean that it will be spared trials and difficulties.  In the first reading today, from the Apocalypse, there was a large crowd who experienced a great tribulation.  They washed their cloaks in the blood of the Lamb, and the Lamb of God (Jesus) will lead them to the sources of living water.  We all want to be in that crowd of witnesses.

We need to remind ourselves that in this world we must deal with forces of wickedness and evil.  There are forces at work in this world that are determined to do us harm and injury.  There are not only demonic forces, but also wicked people who take delight in harming others (think of modern day terrorists).

It is something like our physical bodies. We all want good health, yet we know that there are many factors working against our bodies’ good health. Our bodies have an immunity system, and white corpuscles to fight off harmful bacteria and viruses.  We avoid certain rich foods and drinks because of what they do to our circulatory system.  We resist some comforts and laziness, because we know we must regularly use all our muscles and exercise all our joints if our bodies are to stay agile and healthy.  If we don’t do these things, then our bodies get flabby, our joints get stiff, and our arteries become sclerotic.  And think of how we protect ourselves against smoking, even secondary smoke.

It is the same way with our faith, which is the most precious gift we have.  We are to exercise and protect our faith, our relationship with God.  We are to resolutely resist anything that would do damage to our faith, as we resist evil temptations.  Using the values of our faith, we are to influence the world for the good.  We overcome evil with goodness.  We strenuously resist evil forces from undermining our faith.  If a person does not know that there are people out there who want to harm, lead astray, and even destroy him, then he is in double jeopardy.

We are citizens of two worlds, of this world for 70-80 years, and then we must die.  We are citizens of another world where we have an invitation to live forever, sharing in the intimate love and life of God.  Jesus is our guide.  We are his followers.  He teaches us the truth, and gives us the strength we need to live according to the truth. In this world we have freewill and must make many choices.  May we make good choices, well-informed choices, always advancing the good, while exposing and resisting the evil.

We are Catholics because we want to honor our God.  We are Americans and we want to honor our country.  The best way to be good American citizens is by being strong Catholics, by bringing our Catholic values and principles into the public square, to give guidance to the life of the community and of the nation.  This is primarily the task of the Catholic laity, the 99.9% of the Church.

We are Catholic Americans, not American Catholics.