At Benedictine, Hundreds of Students Commit to Mary 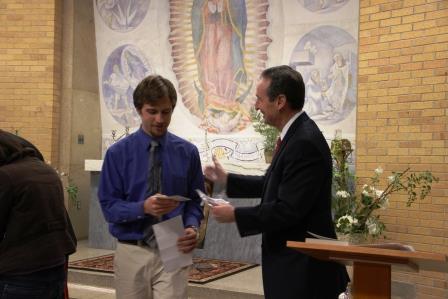 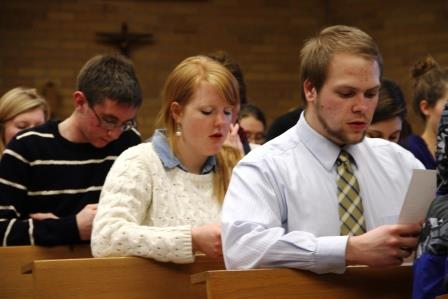 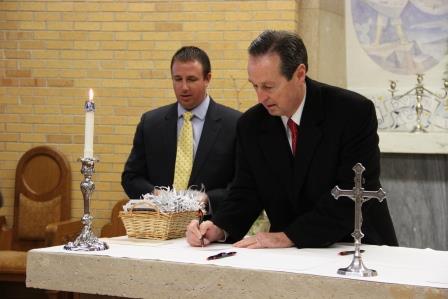 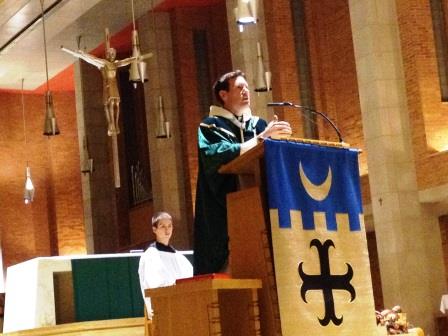 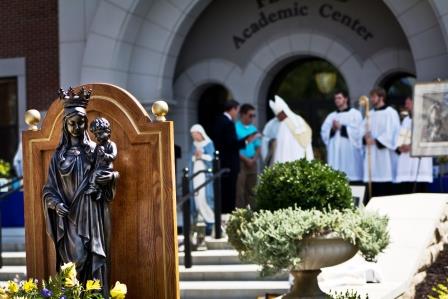 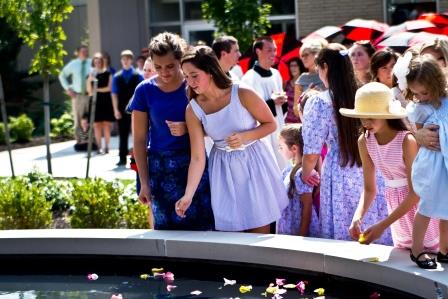 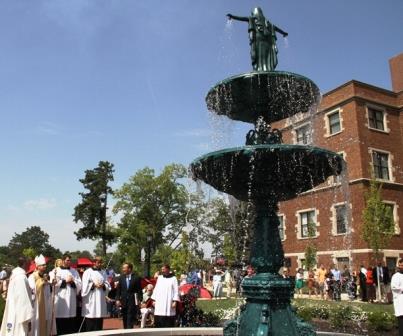 More than 300 students at Benedictine College will consecrate themselves to Mary in this year of the college’s consecration to the Blessed Mother.

President Minnis renewed his own consecration to Mary in the ceremony on the Solemnity of the Immaculate Conception.

Fr. Michael Gaitley gave away hundreds of copies of his Marian consecration text. His Mass and talk on campus inspired many students to consecrate themselves.

On Sept. 8, when the college was consecrated to Mary, 50 bishops sent congratulatory notes and well-wishers nationwide sent religious objects to be blessed.

Students, faculty, staff and participants with Marian names dropped rose petals into the basin of the Our Lady of Grace fountain at its dedication.

Abbot James Albers consecrated Benedictine College to the Blessed Mother Sept. 8 after dedicating the new 21-foot fountain statue of Our Lady of Grace.

At Benedictine, Hundreds of Students Commit to Mary 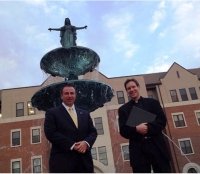 More than 300 students at Benedictine College are consecrating themselves to Mary after weeks of preparation. For most, consecration day will be Dec. 9, which this year is the Feast of the Immaculate Conception of Mary. Others have chosen other Marian feast days.

“Without Mary’s intercession, we would never have been blessed as greatly as we have been. We might not even have been founded,” said President Stephen D. Minnis. “All of the students consecrations are a great gift to give back.” He has given several examples of the Blessed Mother’s intercession at Benedictine College, including the Memorare Army, hosted at the Gregorian.

One reason for all this interest in Marian spirituality: On Sept. 8, Abbot James Albers, OSB, of St. Benedict’s Abbey consecrated Benedictine College to the Blessed Virgin Mary. More than a thousand people participated in the day’s Mass, procession, consecration and dedication of a new 21-foot Our Lady of Grace fountain in the college’s academic quad.

Another reason for the interest in consecration was the visit to campus by Father Michael Gaitley, author of 33 Days to Morning Glory: A Do-It-Yourself Retreat In Preparation for Marian Consecration. Father Gaitley gave a presentation on campus and gave away hundreds of copies of a pamphlet version of his book.

“Mary is on the move in the world. You can really see it here at Benedictine College,” said Father Gaitley. [E-mail readers: Click here to see a slideshow of the Marian renewal at Benedictine.]

In consultation with them, two Marian groups were started on campus this year.

The group Fiat, founded by Brianna Sluder and Molly Minnis, is a women’s group with more than 40 members that promotes Marian spirituality. Group members consecrated themselves to Mary in a sunrise ceremony overlooking the Missouri River on Nov. 1, the Feast of All Saints.

A men’s group, Knights of the Mystical Rose, was started on campus by Evan Burke. The group wears wrist bands to show their bonds of affection with Mary.

Paul Burghart, a junior Philosophy and Theology major, will be consecrating himself to Mary using the method in St. Louis de Montfort’s True Devotion to Mary.

“Benedictine College  introduced me to the Consecration to Mary. I was unaware of it before I came to college,” he said. “Also, the talk given by Dr. Blosser and Dr. Sienkiewicz greatly influenced my decision, basically informing me that we have to go through Mary to get to Jesus anyway. Of course, they also impressed upon me the gravity of the consecration. This is also helped me decide to wait an additional year until I was really ready to take this step in my spiritual life.”

Christian Patterson, a Junior Biology Major from Overland Park, Kansas, is one of those consecrating himself to Mary today using Father Gaitley’s book.

He decided to become consecrated this year later than other students made the decision, so he will be consecrating himself to Mary Jan. 1, the Feast of Mary, Mother of God.

“If is wasn’t for Benedictine College, I wouldn’t be doing this consecration, or even be going to Mass for that matter,” he said. “Coming out of high school I just went through the motions in my faith and probably would have stopped it all when I got to college. Benedictine, though, has helped me find my way again, namely FOCUS here on campus.”

Regular Marian events on campus include the Wednesday morning rosary led by President Minnis and Dr. Kimberly Shankman, the Dean of the College. In the year of consecration, the president has added a First Friday afternoon Rosary.

This week’s Marian events include:

“Benedictine College is a chosen place with a special mission,” said President Minnis. “After the consecration, we belong to Mary even more. It is a great joy to see so many students making this important step in their own spiritual lives.”

Founded in 1858, Benedictine College is a Catholic, Benedictine, residential, liberal arts college located on the bluffs above the Missouri River in Atchison, Kansas.  The school is proud to have been named one of America’s Best Colleges by U.S. News & World Report as well as one of the top Catholic colleges in the nation by First Things magazine and the Newman Guide.  It prides itself on outstanding academics, extraordinary faith life, strong athletic programs, and an exceptional sense of community and belonging.  It has a mission to educate men and women within a community of faith and scholarship.