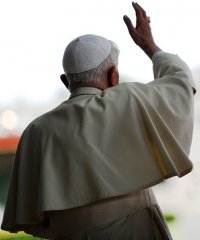 Today, the world watched the last general audience of the pontificate of Benedict XVI. Listening to his address to the pilgrims, I was brought to tears by his words: “Every day, I carried each of you in my prayers, with the father’s heart.”

Our Pope spoke of Peter on the Sea of Galilee: his eyes drifting from the Lord, fear, for the moment, overcoming faith. I’ve been reading Pope Benedict lately, gulping book after book (6 at last count), clinging to the printed word as to a lifeline. Reeling from the shock of his resignation, I turned to books, pouring over them like a daughter with the letters of a beloved father. A sense of desperate preparation overcame me; I was too late, I was out of time. In these last weeks and hours, I realized the comfort, the surety I had taken for granted. I had stood upon rock, without offering thanks or acknowledging my debt.

In the flood of emotion that followed the death of John Paul II, the barque of Peter came to rest upon the rock of Benedict. I felt the security, but failed in gratitude. John Paul II was pope for most of my adult life; because of Benedict, I mourned his passing without fear. Benedict’s pontificate has gone so quickly  — has it been eight years? I greeted it with joy, reveling in his scholarship and rejoicing in his courage. Then I forgot. I turned to other duties with a secure heart, like a traveler who knows that hearth and home are safe.

St. Peter’s Square was dark, the general audience long since over. Here and there, figures moved across the camera. Late as it was, Romans still gathered in the piazza, keeping vigil with their Pope. Sounds emerged, snatches of conversation and of song, and then came the shouts: “Viva il Papa! Viva il Papa!” “Benedetto! Benedetto!” The Romans gathered, and I was with them  — together we waited, as a family waits at a wake or in expectation of a birth.

In the Eternal City, the visitor confronts the Roman claim, the sense of ownership, of possession, with which the Romans view their pope. As a student in Rome, I marveled at it. In St. Peter’s Basilica, the altar belongs to the Universal Church but every seat is a Roman possession. The Roman claim is clamorous and unabashed. The Pope speaks “Urbi et Orbi”, “to the City and to the World”. Among Romans, the priority of “Urbi” is never in doubt.

It is common to speak of the fading faith of Europe. The Italians, we say, do not live their faith, it merely punctuates their lives  — a cultural grammar without will or passion. Today the waiting Romans taught me a lesson. The world looks to the Pope as leader. The Universal Church looks to him as pastor, learns from him as teacher. The Romans have a different attitude. Their outlook is relational: they claim him as a father. They demand his attention to their affairs, his presence at their ceremonies. As children to their father, they claim his time; they want to be in his presence, to hear and be heard. With unapologetic assurance, they assert familial rights. It is as children loving a father, losing a father that they shout to him from within the arms of Bernini’s colonnade.

Today I shared the Roman vigil with a Roman heart. “Today,” said Benedict XVI, in the last general audience of his pontificate, “my heart is filled with gratitude to God”. My heart is also full of gratitude, tardy, urgent gratitude for the gift of Benedict XVI.

On the day of his election, Benedict XVI greeted his flock with these words: “after the great John Paul II, God has now chosen a simple and humble laborer in the vineyard of the Lord.” In his book, Light of the World, the Pope reflects on this moment: “there was nothing left for me” he says “but to admit that there must be, besides the great popes, little ones also, who give what they can”. Any littleness in Benedict is a richness of humility. He has been our servant. In the words of George Weigel “a great giver who completely exhausts himself in his giving.”

In his Rule, Saint Benedict cautions his abbots: the “Shepard will bear the blame” he warns them “wherever the father of the household finds that the sheep have yielded no profit”. The man who stands “in shoes of the fisherman” bears an awful burden. He is first in the field, the target of every assault. He is the last point of recourse; on his desk, all the sin and failure of the corporate body washes up.

Who would seek such an office? Who would dare to shirk it? No man could be ready, no man prepared or sanguine. There were many martyrs among the early popes. Later popes must have envied those martyrs, wondered what it would be like to have a clear task, a brief test, and an assured beatitude.

The Irish monks conceived their martyrdom in colors: white and green. The Italian flag combines the colors of martyrdom: the red of blood, the white of endurance, and the green of mission. The flag of the sovereign landless state of Peter’s successors offers only white. White martyrs are perhaps the greatest. For a pope, white robed on earth, how immense a task it must be to bring that robe unstained into eternity.

St. Columbanus, who wore the Celtic black and burned with “a refiner’s fire”, asked this boon of heaven: “the salvation of many and a solitary spot of my own”. Our beloved Benedict will have his solitary spot. For the gift, and for the giver, I give thanks to God, with gratitude, with sure and certain hope.