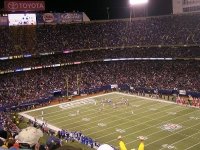 I am a Johnny-come-lately to fantasy football. My siblings and nieces and nephews put together a fantasy league and my kids and I have joined. I see myself as the owner, with the day-to-day football operations handled ably by my twelve-year-old son.

For the past decade or so, watching football for me was largely a matter of seeing if I could get the NY Giant game on my local channels and then rooting for Big Blue.  There have been lean years and amazing years. But this year is different, and yesterday was especially odd.

Since fantasy football is about having a team composed of players from different teams, my football world can no longer be reduced to the record of MY team. It forces me to care about other games. Since my weekly match-up will be calculated by the computer based on the stats of my players in their several different games, I can’t just look at one scoreboard and be despairing or euphoric. I have to think and pay attention as never before. Things once remote now affect me. My outlook is more universal.

Yesterday, as my Giants lost to the Broncos, I had mixed feelings (not as mixed as Mr. and Mrs. Archie Manning, who had a son quarterbacking each team) because the Broncos defense and special teams are on my fantasy team. So I found myself wishing the Giants would win, but that the Denver defense would do well.  That was an odd and unwelcome sensation for me. (As it turned out, the Giants lost badly and we lost our fantasy match-up as well, so I lived the Feast of Our Lady of Sorrows in sorrow, which is not a bad thing.)

Catholicism is like fantasy football in this very important particular: it forces you to care beyond your own limited world. “Catholic” means “universal,” and not only because it is world-wide. Catholics not only belong to a universal religion, we should have a universal outlook. We have to care about everyone and everything, because all people are my fellow creatures of God and Christ’s blood was shed for all.

Pope Francis, in his Angelus message yesterday, spoke about the Parable of the Prodigal Son and God’s mercy. The son walked off the father’s team. He went to play for another team far away. But the father in the parable doesn’t write him off. He still cares, deeply. And he waits for his return. And when he returns, the father receives him with mercy.

“But look, this isn’t just feelings; it isn’t ‘goody-two-shoes-ism.’ On the contrary, mercy is the true force that can save mankind and the world from the ‘cancer’ of sin, of moral evil, of spiritual evil. Only love fills in the voids, the negative chasms that evil opens up in our heart and in our history. Only love can do this, and this is the joy of God!”

Catholicism is the ultimate fantasy league, not because it is a fantasy. No, it is more real than the superficial events that fill the news reports. It is the truth of the world, the battle for the souls of mankind.  And there can be no voids here.  I cannot be indifferent to anyone, because they are all children of my Father, and I have been invited to help Him in the struggle to bring all his children home.

I can no longer sit on my couch and bask in my team’s victory or sulk in its defeat  and say to hell with the rest. I am no longer a mere spectator, I have a stake in every game, in every play.

Am I living in a way that says “I want give every person I encounter the best possible chance for heaven because of my interaction with them”? Does my prayer reflect that attitude? Do I allow myself little peccadilloes because I naively think they don’t bring down the whole team?

My brothers and sisters live in a few different states, and, with kids in college, we are more spread out than ever. But fantasy football makes me think of them every Sunday. It is a fun (when I lose, sometimes annoying) way to stay close as a family.

But most of all, it reminds me that on Sunday, the center of my week, I must rededicate myself to Christ and to everyone He loves. And there is no one riding the bench on his team. No one is second string. No one unaffected, for good or ill, by my prayer and my example.