Charity and Clarity: What to Expect from Pope Francis’ Preaching 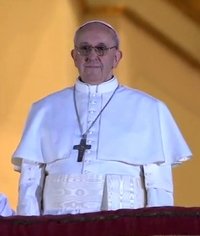 I spent some time reading Cardinal Bergoglio’s homilies of the past few years. If they are any indication of how he will speak as pope, get ready for some wonderful preaching.

While Benedict XVI always surprised me by the depth of his insight into the Gospel, my short foray into Pope Francis’ archiepiscopal preaching surprises me by his direct application of the Gospel to the problems of his diocese, from drugs to human trafficking, from poverty to family unity.

His message for Lent, issued a month to the day before his elevation to the See of Peter lists a whole series of evils, outside and inside the Church. Cardinal Bergoglio ponders:  “The trap of powerlessness brings us to think: ‘Is it any use to try and change all of this? Can we do anything faced with this situation? Is it worth it to try if the world continues its Carnival-esque dance disguising everything for a while?’ Nevertheless, when the mask falls away, the truth appears and, though for many it may sound anachronistic to say it, sin appears once again, that wounds our flesh with all its destructive force, twisting the destinies of the world and of mankind.” (Texts are my translations, originals here.)

His homilies are rich in Scripture and in citations from the Fathers of the Church, but he isn’t above throwing out some local color, citing 1930’s tango composer and lyricist Enrique Santos Discepolo, and calling him “nuestro profeta porteño” (our Buenos Aires prophet.)

And, yes, there is soccer.  In an address to diocesan catechists in March of 2012, he spoke of how Jesus took life as it came, even when his enemies attacked him for eating with tax collectors and sinners. “Like penalty shots in soccer, you have to block them from where they shoot them.  You don’t get to choose where they will shoot them at you. That’s life and you have to take it that way even if you don’t like it.”

One constant in his homilies: questions, and not of the idle rhetorical sort. He wants his listeners to answer for themselves, to interrogate themselves, to measure themselves against the standard of the Gospel that he is explaining.  These questions lead to action, and with charity and clarity he leads his listeners to make resolutions based on the Gospel texts. Actions, not just ideas. On Christmas Eve in 2011 his faithful heard, “Open your heart, look inside and ask yourself:  how am I marginalized, how do I marginalize myself away from love, from concord, from mutual collaboration, from solidarity, from feeling like a social being?”

His homilies include longer, more elaborate addresses, but since the Buenos Aires website indicates that most of the texts are “desgrabaciones,” it means that what is printed was taken from a recording. In other words, he preaches directly, speaking rather than reading. That may change as pope, especially when preaching in a language not his own, but the directness in his style will remain. We already got a taste of it on the loggia. In this age of new media, he will be a fun pope to follow on YouTube!

And since his name is Jorge Mario, he is Marian through and through.  He ended his homily during last year’s Easter Vigil this way: “That night she, too, the Mother, was in vigil. Her insides made her intuit the closeness of that life which she conceived in Nazareth and her faith strengthened that intuition. We ask her, the first disciple, to teach us to persevere in the vigil, to accompany us in patience, to strengthen us in hope. We ask her to lead us to an encounter with her Risen Son; we ask her to free us from fear, so that we too can hear the angel’s message and run off… not out of fright but to announce it to others in this Buenos Aires that needs it so much!”

May Pope Francis’ preaching free us from fear as well, to announce and live the Gospel in this world that needs it so much!