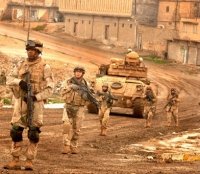 We are members of the Church militant. We are soldiers in Christ’s army. What are we combating?

This past Sunday’s Gospel spoke of a parable where Christ speaks of a king making calculations before going to war with another.  Even though war is not the central message of the parable, the irony of reading that passage amidst contemporary headlines and red lines should not be lost on anybody. It certainly was not lost on Pope Francis, coming off a long day of prayer and fasting for peace. In his Sunday Angelus message he says “Here Jesus doesn’t intend to speak about the theme of war; it’s only a parable. But, in this moment when we are strongly praying for peace, this Word of the Lord cuts us to the quick.”

So… are we Christians called to be peaceniks? So much for Church militant. What of all the military references in St. Paul, the armor of God and what not? Is it all just a metaphor?

Yes, and no.  Catholic Just War teaching indicates the conditions under which a conflict may be considered just. But while the Catholic blogosphere is referencing such conditions, Pope Francis has chosen to speak about the most fundamental war that we should all be engaged in: the conflict against evil in our lives.

Alexander Solzhenitsyn once remarked that the line between good and evil does not run along the borders of countries, but runs through the human heart. That’s your heart and mine. And Obama’s and Assad’s and Putin’s and your granny’s.  We are all called to combat evil in our lives, the evil of sin that threatens to separate us from God for all eternity, in what is the most devastating defeat possible.

If we engage in any other conflict whatsoever, and disregard this most fundamental one, we are doing something supremely stupid. We are wasting our time. The only reason we would ever even consider entering a war would be in the name of that most fundamental and urgent conflict.

I’m a teacher, not a soldier. But the Pope’s point reminds me of the fact that my profession is a search for truth. If I am not striving for the truth in all I do, why would I ever want to get into an argument over anything? What purpose does winning an argument serve if I am not closer to the truth? There is no point to argue anything other than to bring myself and my interlocutor toward the truth.

We all must pray for peace, but an essential element of that prayer is to align ourselves once again on the side of Christ, flexing the muscles of the grace of our Confirmation, by which we are soldiers in his army. And the city we must lay siege to is the hold that evil has in our lives.

As John Donne wrote: “I, like an usurp’d town to another due /Labor to admit you, but oh, to no end; / Reason, your viceroy in me, me should defend, /But is captiv’d, and proves weak or untrue.”

It would be wrong of us to engage in any debate about the morality of any conflict unless we are firmly entrenched in the combat against sin in our lives.  The Pope’s words invite us all to a profound examination of conscience, to see whether we can deepen our prayer as well as our combat.

But let us take heart. In this deep and fundamental war, the Church is the besieging force. We are not being starved out, surrounded by the minions of Hell. It is the Gates of Hell that shall not prevail against the Church. And the reason is that our King has already won the ultimate victory. Our battle is to bring the fruits of that victory to all, beginning with the battle in our own hearts.