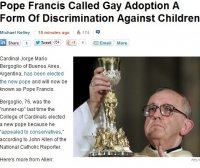 That didn’t take long. It’s already time to defend the new Pope. Much is already being made about Pope Francis’ opposition to gay adoption when it was at issue in Argentina in 2010.

This humble man who cooks his own food and takes public transportation puts a lie to the smear that equates all pro-family positions with hatred. Reports John Allen Jr., “He has shown deep compassion for the victims of HIV-AIDS; in 2001, he visited a hospice to kiss and wash the feet of 12 AIDS patients.”

If you hear someone accuse Pope Francis of hating homosexuals, remind them: He’s not the only one who has questioned gay adoption. Many homosexual men and women do, too.

At the huge marriage protests in France,  many voices in the gay community rallied on the side of children, and against gay adoption.

“For me, the question behind this, the fundamental issue, is the child. Among the responses I’ve heard, I’ve had this business of freedom and equality. Then I pose this question: What of the freedom and equality of the child? The child won’t have its equality vis-a-vis its friends in school. Its peers may have divorced and blended families, but they have, at least, a father and mother.”

He even applied this to his life:

“Twenty five years ago — remember, I’m 49 — I truly wondered about having a child. Like everyone else, I wanted to have a child; it was a question of transmitting my heritage. But then I realized very quickly that if I were going to have a child that way, it would be for the wrong reasons.”

I also recall interviewing homosexual activist John McKellar in 2002. At the time I interviewed him, he was president of Homosexuals Opposed to Pride Extremism (HOPE).

“Sure, we all have baby envy, and lots of us would like to raise kids,” he said. “But we can’t have everything we want in life, and it’s selfish and rude to redefine society’s traditions and conventions simply for our self-indulgence.”

He told me the movement wasn’t about white picket fences.

“Our lifestyle is very much about party, pageant, parade, and promiscuity,” he said. “We want to have our cake and eat it, too. There was an article in the gay press last year titled, ‘How to Stay Married and Still Be a Slut.’“

The New York Times in 2010 said that this characterization of the homosexual lifestyle was an “open secret” — half of San Francisco’s gay marriages became “open” relationships within a year.

The children of homosexuals have added their voices to the chorus questioning gay adoption.

Dawn Stefanowicz shares her experiences growing up in such a household. This National Catholic Register article links others that give resources for adult children of homosexual couples and requests that children’s voices be heard.

So Pope Francis isn’t nuts to oppose homosexual adoption. Many homosexuals — and their kids — share his opinion.