Don’t Just Get Moving…  Stand There! 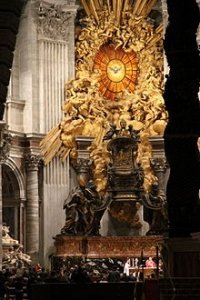 As I write these words, the 153 Cardinals currently present in Rome (not all of them Cardinal-Electors) are on their knees before the Blessed Sacrament. They have just prayed the Glorious Mysteries of the Rosary and will soon intone Vespers.

One can see faces who have appeared on various lists of Papabili. They still have not decided when the Conclave will start, much less on a new pope. The world press, momentarily distracted by the death of a Venezuelan dictator, is chomping at the bit for news, and these guys are on their knees at the Altar of the Chair of St. Peter.

Seriously, the pope’s resignation was announced three weeks ago. Can we get a move on here? Everyone is watching Rome and waiting.

It recalls the episode in the Gospel when Peter goes out one morning to tell Jesus that everyone has been looking for Him. And what was He doing? He was spending the night in prayer to his Father.

Come to think of it, He also spent the whole night in prayer before He chose his twelve apostles, those twelve who would be like the new twelve tribes of Israel for the New Covenant, the New Testament.

He also spent his last night on earth in prayer, and was arrested mid-prayer and dragged off to a hasty trial and a hasty execution.

I am also reminded of an anecdote I heard about the one time Blessed John Paul II’s secretary interrupted him while he was praying. It was on a plane, when the Pope was on one of his many foreign apostolic journeys. Some event in the country had occasioned a change in the papal address which he was to deliver as soon as the plane landed.  As the pope prayed, the papal secretary approached the Church’s Shepherd somewhat sheepishly, and coughed to get his attention.

“Well, then, I better keep on praying!”

I don’t think his prayer was ever interrupted again.

Spurious or not, this story underlines an important link between Jesus and the men who have been his Vicars on earth. They know the importance of prayer, and don’t consider it wasted time.

Pope Benedict himself seems to think prayer so important, that it was worth ceding the papacy to a younger man, so that he could serve the Church in full time contemplation.

And right after his historic announcement, the Church called in the big guns. On February 21, the Cardinal Secretary of State wrote to all the contemplative monasteries and convents in the world and asked for prayers.

In the letter he says:

“His Holiness Benedict XVI has asked all the faithful to accompany him with their prayers as he commends the Petrine ministry into the Lord’s hands, and to await with trust the arrival of the new Pope. In a particularly urgent way this appeal is addressed to those chosen members of the Church who are contemplatives. The Holy Father is certain that you, in your monasteries and convents throughout the world, will provide the precious resource of that prayerful faith which down the centuries has accompanied and sustained the Church along her pilgrim path. The coming conclave will thus depend in a special way on the transparent purity of your prayer and worship.

The most significant example of this spiritual elevation which manifests the most authentic and profound dimension of every ecclesial action, the presence of the Holy Spirit who guides the Church, is offered to us by His Holiness Benedict XVI who, after having steered the barque of Peter amid the waves of history, has chosen to devote himself above all to prayer, contemplation and reflection.”

Pope Benedict, in his last audience, told the world that he was taking a page out of St. Benedict’s Ora et Labora (Pray and Work) playbook. Sure, work is important, but prayer comes first.

A Reuters story today speaks of Cardinals being muzzled and states that they have asked for more time for “reflection,” placing quotation marks around the word reflection as if it were a strange, foreign concept.

You will read a hundred editorials saying that the Cardinals should move more quickly, that the Church needs a pope by Easter. That the problems are so grave that this dalliance is tantamount to irresponsibility.

Wrong. If this choice is so important, we had all better keep on praying.

Alfred Lord Tennyson has an ailing King Arthur utter these words to the last of his knights, Sir Bedivere: “More things are wrought by prayer / Than this world dreams of.” (Morte d’Arthur, 246-7)

In this Year of Faith, we are seeing some amazing examples of how to put faith first. That means putting plenty of prayer ahead of action.

The Church once again, faithful to Christ Himself, is teaching the world to slow down, ponder this life in the light of eternity, and widen the scope of our dreams.