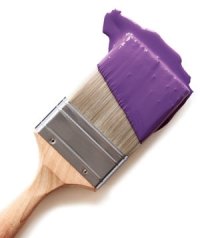 John the Baptist has made his appearance on the Advent scene with his booming command to “repent.” What does it mean to repent? It is central to this penitiential season of Advent.

When my kids are finally ready to say “sorry” for something, which can take some time as tantrums subside and rationality slowly reemerges, it is standard practice in our house (from some parenting book back when I had time to peruse them) to have them say “I’m sorry means I don’t want to do it again.” A first element of repentance is regret for having done something wrong, but there must also be a firm decision of the will not to commit said wrong again.

If one is merely sorry it happened, it is akin to looking at a gash in the wall and saying “What a shame, I wish it wasn’t there.” But true repentance implies as well a purpose of amendment, some thought as how to avoid gashing the wall in the future. “I will carry the ladder through the house vertically, not horizontally.”

But there are wrongs and there are wrongs. John Donne, in his inimitable depth of thought and style, wrote his “Hymn to God the Father” (appended to this post), where he begs forgiveness for different sins.

There are sins in our lives where repainting the wall isn’t enough. One can’t just hang a picture in front of the hole in the wall (there is such a hole in a wall in my house covered this way right now.) Patching is needed. Mesh, spackle, sand, re-spackle, re-sand, feather, sand again, in between allowing for time to dry, then repaint.  Sins of ours that break relationships need to be mended. It takes time.

No time like the present, and no time like Christmastime, for a card or a phone call to take the first step to mend a relationship.

But there are also are sins in our lives that go deep, so deep that we have a hard time separating our view of ourselves from “that sin, through which I run, / And do run still, though still I do deplore?” It is our deep, dark secret, the thorn in our flesh.  Maybe we have bested it for a spell, but it clouds our view of our past, “that sin which I did shun / A year or two, but wallowed in a score?”

The old precept, “hate the sin but love the sinner” is never harder to practice than when the sinner is us. Our hatred of our sins can so easily evolve into self-hatred, into loathing, into despair. How can Jesus possibly come for a person who has offended Him this way, so often, so thoughtlessly? We realize how hard it would be for us to forgive someone who did something like that to us. We teeter on the brink of despair, feeling how we have no just claim on God’s forgiveness.

Our soul, in fact, cries out, “I have a sin of fear, that when I have spun / My last thread, I shall perish on the shore.” It is not that the wall needs paint; it is that the wall is molded, eaten away by self-loathing, and the habit of smiling on the outside while shunning the silence that preludes thoughts of desperation.

There can be no true repentance without faith in God’s greatness and hope in his mercy. To repent is to acknowledge that God is great enough to repair any hole in the wall, even the cankered fissure in the heart of our being. The psalmist cries “Create a clean heart in me, Oh God,” and uses that rare verb in the Hebrew which we saw in Genesis, when God created out of nothing. Our despair is the nothing. It is what has rotted away from our life. But this is not a problem for a God so great.

How can this ever be repaired? We gaze at the sodden, moldy ruin of our wall with sadly insufficient brush and can of paint, like a leper bemoaning his festering wounds.

Advent repentance implies faith in a God so great He can make us whole again, and make our heart anew, our leprosy like the ruddy glow of a sleeping newborn.

It is a Newborn who is coming, after all…
A HYMN TO GOD THE FATHER
by John Donne

III.
I have a sin of fear, that when I have spun
My last thread, I shall perish on the shore ;
But swear by Thyself, that at my death Thy Son
Shall shine as he shines now, and heretofore ;
And having done that, Thou hast done ;
I fear no more.