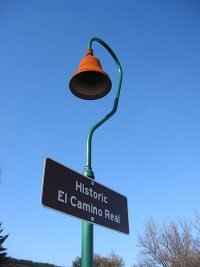 A few months ago I wrote a post about a trip to Barnes and Noble and a book shelf labeled “New Teen Paranormal Romance.” It all started because I could not find my copy of Evelyn Waugh’s The Loved One. I didn’t find it on the paranormal or even borderline normal shelves.  I know you haven’t been worried about it, but I’m happy to report that I found it on a shelf in Santa Paula, CA.  (I had loaned it to a good friend, colleague, amateur MMA fighter and all around great guy who now teaches at Thomas Aquinas College, and whose copy of Belloc’s How the Reformation Happened I now shall possess for a year or two in reparation.)

But my copy of Waugh’s biting satire about California (and America in general) wasn’t my only discovery.

As native New Yorker, most other American cities seem to fall short for me. They have some interesting spots, but don’t seem to sustain the energy level that registers “city” on the gauge I calibrated in adolescence. I would much rather try local fare or micro-brew than sight-see. But my wife’s cousin from Italy was with us, and I wish to remain married to the world’s most wonderful woman, so I was the driver for a jaunt to Hollywood.

Evelyn Waugh’s book about a cosmetician in a mortuary satired California culture as gaudy make-up on a corpse.  Half a century plus later, the make-up itself isn’t looking so good.  Hollywood boulevard comes across as seedy, empty, in need of repair.  I thought I’d get something like Central Park West. I got Astoria Boulevard with stars on the sidewalk, with apologies to Astoria Blvd.

There is an emptiness in the storefronts mirrored by the emptiness in the faces of those walking by. Despite the allure of tinsel town, the people seemed to walk looking down at their feet.  T.S. Eliot’s The Wasteland came to mind, “Sighs, short and infrequent, were exhaled, / And each man fixed his eyes before his feet.”  Eliot is describing what he calls “Unreal City.”

It was less a boulevard of broken dreams than a boulevard of broken lives. Despair interrupted by intermittent bursts of passing pleasure. I never got the connection between Eliot and the Red Hot Chili Peppers before. But they do a bang-up job describing the Unreal City: “A teenage bride / With a baby inside / Getting high on information / And buy me a star on the boulevard / It’s Californication.”

We turned later onto Sunset Boulevard and followed it into Beverly Hills.  Here it wasn’t shabby at all, just more fake.  Lots of shopping, but nobody in the stores. Maybe nobody shops there, because it’s too expensive? It’s almost as if the stores are there to say they have a Rodeo Drive location. The store fronts are fronts indeed. As Sunset hit the Pacific, we had expensive seafood overlooking a beach where a homeless man slept. (That, finally, was a bit more New York-like for me.)

And yet, all along the 101 freeway, every 10-15 miles, there are bells to remind wayfarers that we are traveling El Camino Real, the missionary route of Blessed Junipero Serra and other missionaries, which explains why all major California cities have such religious names. They are all mission stations.  We were staying in Santa Paula, just inland from Ventura, which is an abbreviated form of the city’s full name: San Buenaventura. The mission church is still there, and there you can see the fruit of faith that became culture.  The other buildings of the mission are gone, since they were privatized and sold off by the Mexican government after the Mexican revolution tried to cast off the Christian roots of their culture.

I am preparing to lead a summer camp next week for high schoolers at Benedictine College called CathEdRal (Catholic Education Rally.) Catholic culture in the Middle Ages transformed culture and created a legacy that lasted for centuries. The great cathedrals are emblematic of this. The unity of the Faith was strong and the arts thrived. That is the challenge for us all. Not to re-create the past, but to be the midwives of a new birth, the fruitful encounter of the best of our own culture and the perennial truths of the Faith.

The question for these young Catholics is what legacy they will leave. Will they be the missionaries of the New Evangelization and create a new culture out of the Faith and the best America has to offer? Or will they only patch the external allure of the unreal city? Will the future be a new Camino Real or just more Californication?

The missionaries who spread the Faith in our country dreamed big, and planned their missions, and gave their lives.  We will not succeed in the New Evangelization if we don’t invite young people to dream big, to forge lifelong friendships around this immense and exciting enterprise, and helping them, by prayer and example, to fall in love with the glorious adventure of making faith take root in culture.