Farewell to the Devil? 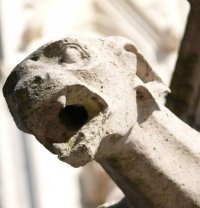 By Dr. Matthew Ramage | Matthew Ramage is assistant professor of theology at Benedictine College (Kan.).  He earned his M.A. from Franciscan University and his Ph.D. from Ave Maria University. He is author of the book Dark Passages of the Bible: Engaging Scripture with Benedict XVI and Thomas Aquinas (2013, CUA Press).

The existence of the devil is not very compatible with modern thinking. Such is the view confronted by Benedict XVI in a response he once wrote to a book called Farewell to the Devil. Its author, an Old Testament scholar, expressed the view of many a modern man in claiming, “By now we have understood that the term ‘devil’ in the New Testament simply stands for the term ‘sin.’” The devil is just an image for sin, just something Jesus talks about to keep a little holy fear in us—but not someone we really have to fear, someone whose existence we can prove and wiles we can’t explain otherwise through modern psychology.

I recently authored a book entitled Dark Passages of the Bible: Engaging Scripture with Benedict XVI and Thomas Aquinas. In that book one of the three main themes I treat is the problem of evil in the Old Testament, specifically the fact that the existence of the devil is something that the Jews only gradually received over the course of salvation history. Earlier strata of the Old Testament do not speak of demonic powers. Instead, evil is attributed to God himself. To take just one of dozens of examples, it appears that God is the one who causes the possession of King Saul: “Now the Spirit of the Lord departed from Saul, and an evil spirit from the Lord tormented him” (1 Sam 16:14; cf. 18:10; 19:9).

With the recognition that evil is incompatible with the divine nature, eventually the above view was replaced with the standard Judeo-Christian belief that evil is not directly due to God but to human and demonic wills whom God has granted the freedom to cause good and evil. But even here, we moderns still wonder whether this development in thought concerning the devil was really legitimate, and whether it needs to be “developed” further in the light of modern science. It is rightly pointed out that Christians of yesteryear defended geocentrism as biblical doctrine, and with Copernicus and Galileo we had to revise our preconceptions. Perhaps the same could be said with regard to the devil?

Benedict’s response to these questions involves a crucial distinction he makes throughout his corpus. We have to distinguish “the doctrinal message of the Bible” from “what may be only the temporary contingent vehicle for its real theme.” We must separate “the content” of Scripture from its “form.” It is critical to discern “what is and is not necessary for a profession of faith” and make it clear “where faith ends and where world view begins.” In a wonderfully evocative image, he states that we have to learn again and again, with the changing of the times, how to distinguish between “fixed stars” and “planets,” between “permanent orientation” and “transient movement.” With respect to the scientific worldview of the Book of Genesis, it cannot be denied that the author lacked the knowledge possessed today thanks to modern physics.

When the world is described as created in seven days, Benedict observes that “it is not directly true, in its bare literal meaning,” but rather statements like this are “valid insofar as they are part of the history leading up to Christ.”

As I emphasize in my book, one key that must be kept in mind here is our faith that the Bible is inerrant in all that it affirms. As the Second Vatican Council’s Dei Verbum teaches us, “Everything asserted by the inspired authors or sacred writers must be held to be asserted by the Holy Spirit.” Now the Bible does not intend to assert scientific claims. This is why Benedict can speak in the way he does above.

What, then, are we to make of the Bible’s assertions concerning the problem of evil and the devil? First, Benedict says that there is a reason why earlier texts of the Old Testament seem to have attributed evil to God himself: “In the early history of the Old Testament faith, discourse about demonic powers had to be set aside, because at first any ambiguity about faith in the one and only God had to be firmly opposed. In an environment saturated with idols, where the boundaries between good and bad gods were blurred, any mention of Satan would have detracted from the clarity of the decisive profession of faith. Only after the belief in the one God, with all its consequences, had become the unshakable possession of Israel could the view be widened to include powers that overrun the world of man, without letting them challenge God’s uniqueness.”

As C.S. Lewis put it, God had to be careful not to reveal certain truths too early to the people of Israel. Like any good teacher, God had to deal with first things first, and that began with taking a polytheistic pagan people and teaching them monotheism. The other truths of the faith, like the existence of the devil, would have to come later.

In Patristic writings this gradual teaching of method of God has a special name: the divine pedagogy. As the Catechism explains it, “The divine plan of Revelation … involves a specific divine pedagogy: God communicates himself to man gradually. He prepares him to welcome by stages the supernatural Revelation that is to culminate in the person and mission of the incarnate Word, Jesus Christ.” At the culmination of this divine pedagogy we find Jesus whose teaching included a clear affirmation of the existence of demons and whose ministry frequently involved the exorcizing of said powers from the possessed. Is it really the case that everything Jesus says and does with regard to demons can be written off as supernatural superstition of a bygone age? Benedict thinks not: “The spiritual battle against the enslaving powers, the exorcism pronounced over a world blinded by demons, is an inseparable part of Jesus’ spiritual way that belongs to the heart of his own mission … The figure of Jesus, his spiritual physiognomy, does not change whether the sun revolves around the earth or the earth moves around the sun, whether or not the world came to be through evolution; but it is critically altered if you cut out the experiential struggle with the power of the demonic kingdom.”

All this goes to say that the existence of the devil is part of the deposit of faith, something revealed to us by Christ and which we can know with certainty. It is important to know that the devil is not just an image, for if we are to fight the good Christian fight we need to know what—or who—we are up against.

In the words of St. Paul: “We are not contending against flesh and blood, but against the principalities, against the powers, against the world rulers of this present darkness, against the spiritual hosts of wickedness in the heavenly places” (Ephesians 6:12). For Pope Emeritus Benedict as well as for his successor Francis who frequently reminds us about the devil, it is critical that our “exorcizing task” as Christians must “acquire again today that urgency which it had at the dawn of Christianity.” The devil prefers to remain hidden, to remain unknown. Today’s Christian, which includes me and you, “is shirking his duty if he helps the demons to cloak themselves in that anonymity which is their favorite element.”

Dr. Ramage’s book, Dark Passages of the Bible: Engaging Scripture with Benedict XVI and Thomas Aquinas, was published in September by Catholic University of America Press.