For Catholic Harmony, the Orchestra has to be in Tune 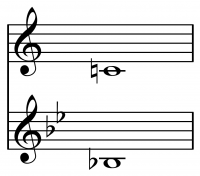 Concert pitch is the same note, even when some instruments play a C and others a B flat.

Pope Francis’ audience this week explains three meanings of the catholicity of the Church, and the order of his points is significant.

On a dreary autumn Wednesday in Rome, Pope Francis resumed the cycle of teachings on the Creed, and spoke of the third of the four marks of the Church. The Church is “catholic.”

After explaining the Greek etymology of kath’olon (according to the whole, hence “universal”) he spoke of universality regarding the Faith, regarding geography and lastly regarding a harmony where unity and diversity come together.

Let’s start with his third point: “…the Church is catholic because it is the ‘House of Harmony’ where unity and diversity know how to join together to constitute richness.” He illustrates this with the image of a symphony, where the Holy Spirit is the “maestro,” bringing the different timbres of the instruments into unity.

Implicit in the Holy Father’s comparison is a point that should not be overlooked. The diversity comes from the different particularities of the instruments. The flutes can’t be slighted by the cellos for being shrill, nor can the bassoons be mocked because they may sound a bit nasal. Different tonalities notwithstanding, they are all striving for unity together, under the direction of the Holy Spirit.

So there is a diversity which is a strength and a benefit and essential to the Church’s catholicity. It is good that there are different religious orders and Eastern Rite liturgies, just as it is beautiful that there are different customs in different cultures or different birthday traditions at your house and at mine. These differences underscore the underlying unity of the Faith, as differences in customs underscore the underlying unity of human nature.

But there is also something else, often masquerading as diversity,  which goes far beyond the varied tonalities of flutes and bassoons. What is often celebrated as diversity these days is a diversity of belief. We are supposed to get along and pretend to be a unity when we have disagreements about essentials, about what the definition of marriage is or the moral protections due the unborn.

George Weigel has recently argued that the disunity in the Church in the US does not stem from different political beliefs, but from a lack of professing the Faith in its totality.

That is not playing different instruments. That is playing different tunes. It is discord under the guise of legitimate diversity. The greatest conductor in the world will not be of help when the horn section and the strings are playing different scores. In that case, the conductor has to stop and get everyone on the same page, and before beginning again, the orchestra has to tune.

Such tuning is implicit in the first point in the Pope’s teaching, about the universality of Faith, where Christ gives the Church “the true confession of faith, the fullness of sacramental life, the authenticity of ordained ministry. In the Church each one of us finds all that is necessary to believe, to live as Christians, to become saints, to walk in any place, at any time.”

The Catholic Church is where God has given the world all the truths we need, all the Sacraments we need, all the means to live our Christian life. And if one does not accept that totality, when one cannot confess, as converts to the Faith do, to believe “all that the holy Catholic Church believes, teaches and professes to be revealed by God,” this lack of catholicity of Faith destroys the possibility of unity within legitimate diversity.

The second point, that the Church is universal geographically, excluding no one, depends on the first. No one is excluded from the Faith because of race or language or blood. But one who rejects part of the universality of Faith has closed himself off to the fullness of Christ’s gift.

As a Catholic, I may very well have more deeply in common with a Kenyan tribeswoman who lives the fullness of the Faith than I do with a fellow American who actively supports abortion rights.

A lack of universality of Faith can only lead to cacophony, not harmony. But even where the Faith is strong, it is always a challenge to accept other cultures and other spiritualties and other legitimate viewpoints within the Church. This is where we focus on the example of our Pastors, the orchestra’s section leaders under the direction of the Holy Spirit.

Diversity is a great gift to the Church and essential for catholicity, but even more fundamental is the faithful adherence to all that the Church teaches in matters of faith. For true Catholic harmony, the orchestra has to be on the same page, and tuned to the same concert pitch.