“For the Sake of the Name” 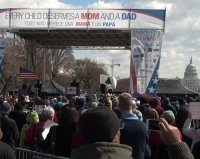 By Dr. Frank Kessler | Dr. Kessler is a professor of Political Science at Benedictine College in Atchison, KS.

In the most recent issue of the Leaven (April 12, 2013), there was an article by Archbishop Joseph Naumann called “Redefining Marriage Would be of Service to no one.”

In the article the bishop lamented that he would be joining the ranks of people like Kansas Gov. Sam Brownback and be “branded as a bigot and a homophobe for merely questioning the advisability of redefining marriage.”

It reminded me of comments by Tom Hoopes recently in this Gregorian Institute blog about the difficulty in discussing things with people who call you a “hater.” The bishop was spot on when he commented in the Leaven that conversation is not the goal of such name-callers. They bully and intimidate to deflect from conversation. Their theory seems to be, if we tell them (the supporters of heterosexual marriage) to stop questioning, they will not want to be seen as “out of the mainstream” and they will just cower in a corner.

Sunday’s first reading came from the Acts of the Apostles (5:27-32, 40b-41) and recounted the story of the apostles having been brought before the court of the Sanhedrin to account for their actions in speaking in the name of Jesus. They were told, “We gave you strict orders, did we not, to stop teaching in that name?” Peter replied, “We must obey God rather than men.”

It would be so easy in a culture like ours today to let the marketers of public opinion lobby us into silence. After all, who among us likes to be chastised as being unkind, insensitive, and lacking in concern for the feelings of others? The argument is also made, “We all know some wonderful people who have same sex-attractions. How could we deny them the opportunity to be with the person they love?”

This was the position of a U.S. Senator, Rob Portman from Oregon who learned that his son was a person with same-sex attractions. Portman reversed his previous position “out of love for his son.”

The problem seems to be that, based on their beliefs about marriage, people are seen as not loving the individual with same-sex attractions. We should all love one another regardless of how they act. This should not require that to be “loving” we must celebrate each of their actions.

Does love mean to paraphrase the old canard in the classic movie Love Story — “Love means never having to say you’re sorry”? Why can’t we love the person while not validating their choice of behaviors? People also have other attractions too, but society does not always regulate their actions related to physical or physiological attractions. What about those who have a proclivity to smoke? Originally, same sex attractions and desire to act on those inclinations, was to be handled by same sex unions. Today’s step is same-sex marriage. What will be the next set of issues be in the future?

Those who would support a nationalization of same-sex marriage might, like those who sought abortion on demand, prefer to save time and money and just have the Supreme Court impose same sex marriage upon the entire country as abortion was imposed (Roe v. Wade in 1973). In the Roe case, all 50 state laws were modified or overturned as being too restrictive of a married couple’s newly created “right to privacy” (Griswold v. Connecticut, 1968) in the bedroom for married people who “chose” to use contraceptives.

The more recent argument being made on same-sex marriage is not mainly on privacy grounds but on the grounds of “fairness.” What decent human, they ask, would be so “unfair” as to stand in the way? Fairness has proven to be the ultimate mantra to push the Constitution further down slippery slope of those whose positions cannot be sustained in the Legislative Process. For close to a century now, the courts and the 14th amendment equal-protection clause have been used to end run Congress and state legislatures.

In addition, the argument goes, there has been a “sea change” in public opinion since the 1996 Defense of Marriage Act which by federal law defined marriage as between one man and one woman. In recent oral arguments before the Supreme Court which was seeking to end a voter initiative (Prop. 8) in California saying marriage to be defined in the California Constitution as between one man and one woman (Hollingsworth v. Perry 2013), Chief Justice Roberts addressed what Archbishop Naumann had called a “full court press” PR campaign to silence dissenters to the new normal. Justice Roberts retorted to the claim that there had been a”sea change in public opinion” between 1996 and 2013, by saying “I suppose the sea change has a lot to do with the political force and effectiveness of the people supporting your side of the case?”

One might ask simply, is the Supreme Court just supposed to uphold the views of surveys of public opinion which have responded to a media “full court press,” or should the court resort to the Constitution for guidance? The lesson of Roe for the Courts is public opinion could change back despite efforts of the “enlightened” pro-abortion lobby.

The Court is still reeling under the deluge of cases asking for exceptions to Roe. It has taken on over 40 of them since Roe. The same could happen with same sex marriage. It could be the first step on the road to many other attempted redefinitions of human relationships using a Supreme Court imprimatur for a new definition. After all, when the Supreme Court in Griswold v. Connecticut overturned Connecticut law prohibiting the sale of contraceptives to married people, those who questioned where this might lead were actually quite prescient. Abortion followed from the Griswold case in Roe based on that right to “privacy.” Most states no longer enforce adultery laws as long as the two parties are “consenting adults” acting in their own private space. So much for the value of the marriage license as a contract!

We should all pray for the courage of Peter and the apostles when they were dragged before the Sanhedrin (which today would be the court of “modern” pressure groups and the enlightened media driven court of public opinion).

When the apostles were ordered once again to stop speaking in the name of Jesus, The Acts of the Apostles reminds us, “they left the presence of the Sanhedrin, rejoicing that they had been found worthy to suffer dishonor for the sake of the name.”

How many of us pray to be found worthy to suffer being called bigots, haters, homophobes and so on “for the sake of the name?”