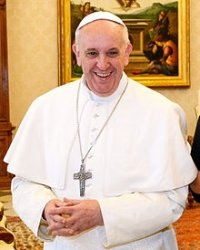 “The high priest questioned Jesus about his disciples and his teaching. Jesus answered, ‘I have spoken openly for all the world to hear; I have always taught in the synagogue and in the Temple where all the Jews meet together; I have said nothing in secret.’” (John 18:19-20)

The high priest was fishing for a hidden agenda. Jesus had none, and told him straight. For his straight-talk, He took one across the face from one of the guards.

Jesus says he spoke “openly.”  The Greek term is παρρησία, (parrhesia) meaning “openness, frankness.” From its etymology (πᾶν “all” and ῥῆσις / ῥῆμα “utterance, speech”) it points to an openness to talk about everything and to hide nothing.

Such bold speech is a hallmark of Christ and his disciples. In Acts 4:13 the Jewish authorities are amazed at the parrhesia of Peter and John. Such has been and will be a hallmark of Pope Francis.  In fact, he likes to use that very word.

He celebrated mass Tuesday morning, April 23rd, with the Cardinals resident in Rome on the occasion of the Feast of St. George, which for a man named Jorge Mario is his onomastic feast (his name-day, an occasion for celebration in many countries.) In his very straight-forward homily, Pope Francis said “Let us ask the Lord for this parrhesia, for this apostolic courage.”

He was commenting on chapter 11 of the Acts of the Apostles and the Holy Spirit pushing the Church forward. The first preaching was to Jews, and suddenly the Holy Spirit inspired men to preach to the Greeks. Back in Jerusalem this raised a few eyebrows, so Barnabas was sent to check it out. The Holy Father sparked a chuckle from a chapel full of cardinals when he said “Maybe with bit of humor we can say that this was the theological beginning of the Congregation for the Doctrine of the Faith, this Apostolic Visitation of Barnabas.”

Barnabas sees that the Spirit is at work beyond where many thought it was possible, and Mother Church gets an influx of new children, whose tie to her is in the newness of life brought by belonging to Christ, not by race or tribe.

This outgoing nature of the Church is the translation into action of what parrhesia means for speech. The Church is missionary because we must frankly act upon what we frankly believe and proclaim. We are called to bring all people to a relationship with Jesus Christ. That’s not a hidden agenda, it’s wide open.

On April 14th in St. Paul Outside the Walls, Pope Francis preached about Peter and John’s frank answer to their own arrest, stating that they had to obey God before men. “Peter and the Apostles proclaim courageously, fearlessly, what they have received: the Gospel of Jesus. And we? Are we capable of bringing the word of God into the environment in which we live? Do we know how to speak of Christ, of what he represents for us, in our families, among the people who form part of our daily lives? Faith is born from listening, and is strengthened by proclamation.”

The phrase translated as “fearlessly” in the official English translation is not a common word in Italian. In fact, it’s Greek. You guessed it: parrhesia. That’s twice in ten days. It’s a word that is definitely on Pope Francis’ mind and heart.

Frank and direct preaching of the Christian message is useless without frank and fearless living of the truths we proclaim.  It is not only about speaking truths to power; it’s about having the power to live out the truth, in season and out of season.

One who speaks and lives this way will take his lumps from the world. But the Holy Spirit inspires us with apostolic courage.

Better to obey God rather than man. The joy and rewards are greater.