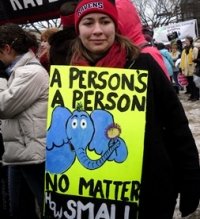 By Sara Stacey || Sara Stacey is a Benedictine College senior who writes for the BC Circuit student newspaper and blogs between classes at LadyInWaiting.blogspot.com.

The temperature was around 20 degrees. It was snowing. The sky was gray. A perfect recipe for a miserable day.

Yet over 650,000 people chose to march to the United States Supreme Court building on Jan. 25 in mourning for the 40th anniversary of Roe vs. Wade.

Human beings love a good fight. Whether it’s an intense political debate or watching two excellent sports teams battle it out for the championship, we love conflict.

We also love justice. Good must triumph over evil and true love must win the day. It’s only right. A noble cause is greater than those who are fighting for it. The freedom to live is the noblest cause of our lifetime.

There have been great fights throughout history, from the fight against the Nazis to the Civil Rights movement. Abortion is today’s civil rights movement.

I froze on Friday. I couldn’t feel my toes. I really wasn’t sure my lips were still attached to my face. My shoulders are still sore from shivering so much.

It was a perfect day to stand against injustice.

The more difficult a fight is, the more intense the fighters get. This isn’t easy. This isn’t for the faint of heart. This isn’t going to change unless we act.

The most pro-abortion president in history has been re-elected. Society promotes a self-indulgent, utilitarian mentality that pursues pleasure as life’s highest goal and abhors inconvenience realities like pregnancy and babies.

But we have hope. We know we will win.

The older the pro-choice side gets, the younger the pro-life side becomes. The only pro-choice protesters at the march were all well past 40 while the vast majority of the pro-life marchers were college or high school students.

The more the pro-choice side falls back onto quasi-philosophical, unsubstantiated rhetoric, the more educated and well spoken the pro-life side becomes. The most common pro-choice argument thrown out at the march was “It’s not a ‘person’ yet, it doesn’t have consciousness” while anyone who passed high school biology can tell you that when an egg cell and a sperm cell combine, a new being with unique DNA is formed.

The more dissenters the pro-choice side has, the more members the pro-life side gains. Once truth has occupied the heart and mind it is inevitable that people will be converted, from “Roe” herself, Norma McCorvey, to former Planned Parenthood clinic director Abby Johnson.

Life will be victorious. Justice and truth will win. History will show who stood with the voiceless and who tried to shout them down.