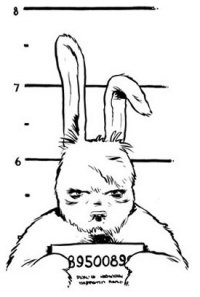 But the Easter Bunny? I never got that one. When my oldest (now a high school junior) came home with a story from his (Catholic) kindergarten that the flash of the Resurrection had blanched a bunny white, I shocked him by telling him that there were originally two bunnies. The other had been crushed when the angel rolled the stone away.

Admittedly, not my most Franciscan moment. But I am not an Easter Bunny person. Though not as obsessed with him as Bill Murray was with gophers in Caddyshack, I finally found a way to extirpate my long-eared nemesis from my family’s Paschal festivities. No explosives were necessary.

As our family grew, we went to visit my in-laws in Arizona around Easter, and I reconnected with my buddy, Nikolas Nikas (yes,  that’s a Greek name) who now runs the amazing Bioethics Defense Fund. He shared a family tradition that we adopted as our own. It has worked well for us, so I am passing it on.

It may sound macabre, but it basically consists in the kids making tombs for Jesus. They love it.

Here’s how it works.

Sometime early Good Friday afternoon, (usually around the time when my mom used to tell us we had to be quiet because Jesus was on the Cross -I never found out why my silence was supposed to do anything when soldiers and people were screaming at him anyway-,) each kid gets a shoebox and some paper and we gather as a family to read a short account of the Passion. I usually read from St. John since that is what we will soon hear proclaimed at the Celebration of the Lord’s Passion in church.

Then each of the children draws a figure of Jesus and wraps him in some shroud-looking paper, and tops the shoe box with a stone.  It’s that simple, and yet people still fight over crayons and boxes and which rocks look best. The day of preparation over, Saturday is spent waiting (and with little ones asking if they can check their tombs.) Nope.

So even the nervous expectation that the disciples experienced is recreated. Not to mention hope for glory.

Sunday morning. Early. The youngest normally is up first, and all must come to mom and dad’s room. Dad, with eyes as bleary as Peter on his morning run that day, reads the account of the Resurrection.  Then we go downstairs. Alas! The stones have been removed, and Jesus is no longer there. Behold the place where they laid Him! It is gloriously full of goodies, and in some cases contains an item someone may have given up for Lent. The joy of the Resurrection, in body and soul!

My wife has saved some of the children’s “Jesuses” over the years, and it is amazing to see how their idea of the Lord matures and evolves, how there is more focus on his wounds, how his face shows suffering, even how they help each other “because Fiona is good at drawing beards.”

So, if you want your kids not to wake up thirty-years from now in the wee hours wracking their brains pondering the possible correlations between the Resurrection of the Son of God, plastic grass, and marshmallow peeps, I say go bunny-less!

Here’s a moment any Catholic parent can cry over. Two years ago, Johnny (then 9) tells Joe (then 6) a joke:

“So I said to Joseph of Arimathea, ‘Pretty awesome of you to give Jesus your own tomb!’”