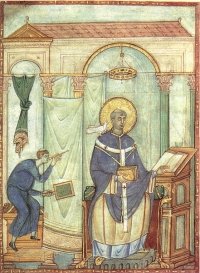 Gregory’s secretary spies on him, and sees a Dove whispering to him.

September 3 is the Feast of St. Gregory the Great, who lived in the 6th century after Christ. He was the first monk, a Benedictine, to become pope.  Barely a generation after St. Benedict, it is from Gregory’s pen (stylus is probably more precise) that we have the Life of St. Benedict, which includes the story of St. Benedict and the raven. For Benedictine College, it was a fitting day for the Academic Convocation and Mass of the Holy Spirit to kick off a new school year.

For those of us at The Gregorian Institute at Benedictine College, it is a day to celebrate his particular patronage. Two years ago today our website was launched, with Tom Hoopes first post about none other than St. Gregory.

For me, Gregory the Great has many lessons for us, but two stand out when I think of Catholic identity in public life: vigilance and unity.

Gregory’s mother, Sylvia (also a saint), gave her very Roman son a Greek name. Rome at the time was under the Goths (the Western Empire having fallen around 486AD) and the Roman Emperor was in Constantinople. Gregory’s name means “Vigilant one” and recalls the Greek verb used in the New Testament for the shepherds keeping night watches for their flocks.

Gregory was indeed vigilant. He was vigilant of his own words, speaking and writing only what he discerned the Holy Spirit wanted him to say. His secretary spied on him writing a homily on Ezekiel only to see him taking dictation from a dove. He was vigilant for the needs of the Church and Evangelization, and when he saw pale-skinned children in the slave market, and was told they were Angles from Anglaland (England,) he said “not Angles, but Angels,” and sent St. Augustine of Canterbury to evangelize and shepherd them.

He was vigilant over the needs of the faithful, and as pope reformed the liturgy and codified and organized the many chants whose style now bears his name.

But this Roman with a Greek name, who took action where his watchful, prayerful, monastery-trained vision beheld a need, carried out his tasks in such a way that he brought people together. He was a unifier. He is considered a saint in almost all Christian traditions (at least the the ones that consider anyone a saint,) and even Calvin, fountainhead of anti-clerical Presbyterianism, called him the “last good pope.”

When Augustine asked him whether Roman or Gallican (French) customs should be used in Church practices in England, Gregory told him that things should not be loved because of the place, but because they are good in themselves. He thus invited him to take the best from different practices and blend it with what was authentically good in the English customs he encountered.

In a turbulent time for Rome, he unified the Church’s finances, using accounting methods that would not be in common use for centuries. He urged his pastors to give to the poor. He rebuked them when they did not.

And yet, his desire to unify did not make him a weathervane. He was clear on matters of Faith, and his Dialogues show that he was capable of putting his mind into the mind of others to understand their arguments. He was unwaveringly faithful, but also unwaveringly charitable. His adversary was never his enemy.

In a culture that is also hostile to the Faith, as the Gothic kings could often be, St. Gregory teaches us to be watchful and vigilant, for there are always opportunities to do good. We too must be attentive to the dove of the Holy Spirit whispering in our ear.

And we must be people of unity, who, even when we cannot agree, are clear yet charitable, so that even our adversaries know that we respect them and want what is best for them.

At Benedictine College, though, we can never yell “Go RAVENS!” without a nod of thanks to Pope St. Gregory the Great, whose love for Holy Father Benedict was so deep and so fruitful for the history of the Church.