I am Truly Sorry, Little Brother 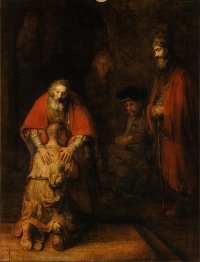 Pope Francis’ initial reflections on mercy have cut me to the quick. I am the older brother in the parabIe. I have tried to do what the Father told me… but did I follow the Father’s example?

We have not yet had the inaugural mass of Pope Francis’ pontificate, and already a theme has emerged: mercy.  Barely hours after coming out on the loggia, he brought flowers to Our Lady at St. Mary Major and told the confessors there to be merciful to their penitents, that mercy is what God’s people needed most.

He explained that he chose the name Francis as a man of peace, a man who chose a way of poverty, to show mercy to the poor.  And in that meekness and lowliness there is great power.

Yesterday in his first angelus message, he spoke of a book he had been reading these days, Cardinal Walter Kasper’s book on mercy. (If you say you can’t find time to read spiritual books, nonsense. I don’t think your schedule has been more hectic than Pope Francis’ over the past few days!)  He spoke of the power of mercy, a little bit of which “makes the world less cold and more just.” He related a conversation with an old lady in Argentina, who told him, as she waited for confession, that “if the Lord didn’t forgive everything, the world wouldn’t exist.” The old woman’s words gave the then archbishop pause.

And Pope Francis’ words give me pause.

Yes, I am one of the happy ones, one who gave in to gloating, perhaps, that “one of the good ones” got elected pope. One of the guys I approve of. Because, you know, I am pridefully content when someone calls me “orthodox,” since I do try to be faithful to what the Church teaches. I may even smirk with a sense of spiritual superiority when I hear some poor deluded cafeteria Catholic try to rationalize a theological position that skates off the rink of right reason.

I have been the Pharisee to many a publican. And in my heart I may have bemoaned my own right thinking and lamented so many attempts at right living.

Jorge Mario Bergoglio is a man of truth, sure, but in and beyond that he is a pastor, now the pastor of the world as Vicar of Christ, the Good Shepherd who gives his life for his sheep.  He used to sign his messages to his flock in Buenos Aires, paternalmente “paternally.”  Pope Francis is a father.

And yes, I have done what my fathers have said, I have followed Blessed John Paul II and Benedict XVI. But Pope Francis is showing me now that I have not followed their example.

“While he was still a long way off, his father caught sight of him, and was filled with compassion. He ran to his son, embraced him and kissed him.” (Lk 15:20)

What an amazing portrait of mercy, but not until today did I notice that the Father was alone. I, the older son, was back home sulking in between bouts of self-contentment for not being the loser in the family.

Father, I am sorry I left you alone to search for your son, who is my brother.

Little brother, I am sorry I wasn’t there holding the cloak and ring to welcome you back.

Yesterday I tweeted that Pope Francis’ pontificate will be where no compromise on truth meets no compromise on love. Where those two roads meet is mercy, and that is where the Father waits, and watches, and searches the world for his children.

Open my heart, Lord, so that I can accompany my Father and, while doing what he says, do also the things he doesn’t say, but teaches me by example.  As Francis of Assisi prayed, make me a channel of your peace… and of your mercy.