I Work At Our Lady’s College 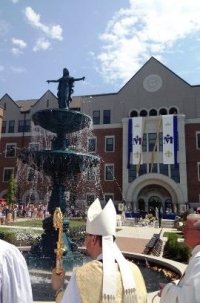 I work at Our Lady’s college — you know, that college with a long history in the Midwest, a winning football tradition, a memorable fight song, and a beautiful Lourdes grotto that people visit from all over the country to light candles … Benedictine College in Atchison, Kansas.

That joke, which Benedictine College’s president likes to use to open speeches, seems more appropriate than ever today.

Yesterday, more than a thousand people flooded campus to participate in a Marian procession and the consecration of Benedictine College to Mary.

It’s strange. Before 2008, Benedictine College had no Grotto in the center of campus. Now it does, and it seems like the college would be incomplete without Mary there. And before last week, when there was no 21-foot fountain statue of the Blessed Mother in the academic quad, nothing seemed to be missing. But this week it is already hard to imagine the quad any other way.

Maybe it’s because Mary was here before we all were.

One of our founding monks, a Lutheran convert, was lost i 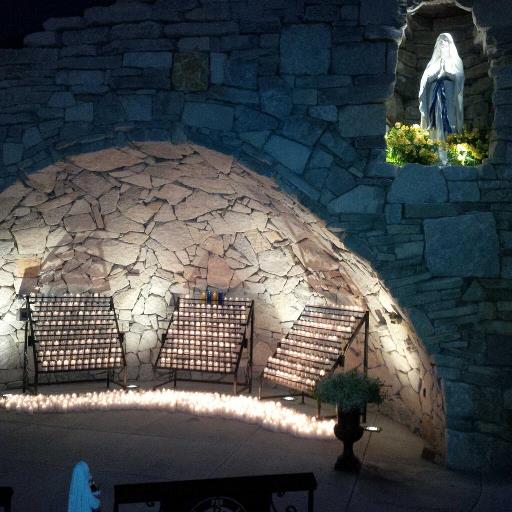 n the Kansas wilderness and feared for his life when he prayed to Our Lady for safety. At that moment, he saw a light flicker in the distance and stumbled toward it, to safety.

“Why did you put a light in the window?” he asked the mother and girl who lived in the cabin he found. Because a “woman dressed in white” appeared to the girl in a dream, he was told. In his diary, he called the incident “a miracle of the Mother of God,” and his community founded Benedictine College two years later, in 1858, the year a woman dressed in white appeared to another small-town girl — St. Bernadette in Lourdes, France.

In 1863, the Benedictine Sisters of Mount St. Scholastica brought their Marian devotion to Atchison, too: They celebrated their first Mass on the patronage of the Blessed Virgin Mary, and got permission to substitute the Little Office of the Blessed Virgin Mary for the Divine Office for years. The founding mother would ask for daily prayers to the Immaculate Heart of Mary for the “poor children of Kansas.”

Her prayers were answered. 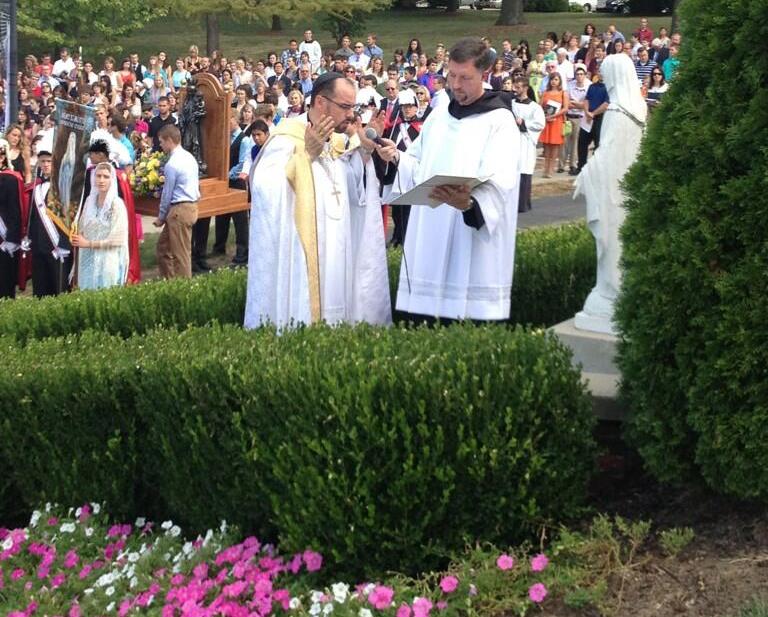 Now, you find Our Lady everywhere you turn on campus. She is there in a statue by the library. She is there in the Guadalupe Chapel. Her picture is on the Memorare Army lists celebrating the prayer campaigns that expanded the school in the 21st century. The president shares miracle stories about her.

Mary is not at the fringes of life at Benedictine College. She is at the heart. You can’t miss her.

Benedictine College students aren’t always seeking the faith. But they never get to avoid it.

At some universities, you can find the faith if you seek it out — you can join the Newman Center, or attend the Bible study, or take the class from that one professor. But that’s not how it worked for Mary herself. She didn’t seek out Gabriel. He sought her. And because she was immersed in an environment of faith and prayer, she was available to be found.

In the Marian procession we said a Rosary in unison as we walked through campus. It worked because six football players wearing Secret Service-style ear pieces were listening to a team captain, and shouting out the prayers in unison with him, so that each section of the procession was on the right track.

At the end came fireworks, confetti canons, and lines of people named Mary strewing rose pedals in the water of the Our Lady of Grace fountain.

But first came the consecration of the college by the abbot, returning back to Mary what was hers.

Pray that she will keep finding poor children in Kansas who might be lost for a time.