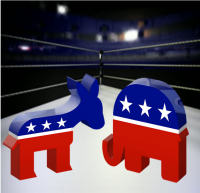 As we watch the political Kabuki theatre surrounding the budget process and the government “shut-down” it is hard not to ask, is this any way to govern?

When LBJ was president, he came to the Oval Office after being JFK’s vice president and more notably the Senate majority leader.  He knew the fables and foibles of the Senate, and had sparred with members of both parties to get what he wanted to have passed.  Upon entering the Oval Office, he was already well schooled in the legislative process and the arm twisting involved.  Probably his Texas roots predisposed him to quote the scriptures invariably to his own purposes.

He was especially fond of Isaiah 1:18 which chastised the Israelites for straying from the right path.  Still, the Lord did not give up on his covenanted children but called them to repent or taste punishment:

Come, now, let us reason together…though your sins are like scarlet,
they shall be white as the snow…but if you resist and rebel you will be devoured by the sword.

Those who worked for and with LBJ knew full well that he could twist arms better than the top rated  wrestler in the WWE of today.  He did not speak softly, but he carried a BIG STICK.  When he got the principals behind closed door, he became Samson — prone to slaying the Philistines with the Jawbone of an Ass (cf. Judges 15:16).

There is an old saw about law making that goes something like this, “If you have a weak stomach, there are two things you don’t want to see made, one is sausage and the other is laws.”  Somehow, I think Americans of all political stripes can relate to this if they have the stomach reading the diatribes that pass for political commentary in this early years of the 21st. century. Half-truths, denials and over-the-top verbal negative characterization of political opponents  calling them terrorists,  and the likes has made the common courtesy and civic discourse necessary to govern a rare commodity indeed.

It might not be too farfetched to say LBJ had an inflated sense of self, but not exactly a God complex.  As we can document his initials were LBJ, so were his wife Claudia Alta aka Lady Bird Johnson.  Both of their daughters Lucy Baynes  and Linda Bird Johnson were also branded with the initials.  Presidential egos and conflicts between Presidents and Congress over signature legislation were common, but left to a great extent, behind closed doors.

Still, as political satirist Findley Peter Dunne (1867-1936) wrote in his satire of Irish politics in the south side of Chicago at the turn of the 20th. Century, Mr. Dooley in Peace and War, “Politics ain’t beanbag.”  Yet, there was a sense of decorum.  Alas, legislating is rarely an elegant process.

A number of years ago when I was a member of the Board of Editors of Presidential Studies Quarterly, it was part of our duty to participate in the discussions about giving governing advice (ultimately put in the form of a small “how to” manual ) to the incoming President and staff based on what past presidents had done that worked and the pitfall along the way so the new President could learn from the successes, misfires, and serious mistakes of his predecessors.  Invariably we encouraged respect for opponents which can produce a better policy outcome.  We even put together an entire issue of the PSQ devoted to civility.

Ronald Reagan reveled in calling his opponents “tax and tax spend and spend liberals.” Tame indeed by today’s standards.  Reagan knew the inherent value  of recognizing  the importance of interpersonal relations between political adversaries.  He would meet with then Speaker of the House Thomas P. “Tip” O’Neill, a Democrat,  to discuss policy differences and work them out with Irish good humor over a few beers.

Both Reagan and O’Neill recognized that the other was not an ogre, but someone who was acting on a divergent set of views on the role of the Federal Government.  Each of them saw through the veneer of the debate to the intrinsic decency of the man they were debating.

Somehow, much of that has been lost.

Common ground efforts are considered a cop out.  Of course, one should not surrender his or her core principles to come to a successful compromise.  One need not teach or write on Constitutional Law or the Presidency to realize that the entire system of governance crafted by the founders was a bundle of compromise that resulted in our instrument of governance, the Constitution.  They had lived under the boot of royal prerogatives assumed by British monarch and Parliament.  They hoped that a system of checks and balances would encourage good public servants to talk out their differences rather than running the nation by some Royal Decree.

The grandeur of the system they created has devolved into petty partisanship and hardened ideological positions. Sad to say, civility has rarely been rewarded in campaigns but today the entire process of make government policy has become an extension of the campaigns. Professor George Edwards bemoaned  how public policy sales  has encouraged a permanent campaign.

Public relations experts, marketers, and data mining have too often replaced policy analysts who do Cost Benefit Analysis  to determine what would work best for all citizens involved.   Instead, the temptation has become great indeed to accuse the other side of bringing on Armageddon

It was such a joyful experience to go out a couple of days ago to enjoy the crisp fall air, trees in their vibrant colors, and a deep blue sky. What a relief to notice that despite the sequester cuts that were supposed to end civilization as we know it or the unprecedented  catastrophy which awaited us when the federal government shut down, the sun still arose and the sky had not fallen. Readers of the Gregorian have a wider perspective, I would suspect. God is in His Heaven … Be not afraid.

Many of us can remember (some more vividly than others) having seen playground finger pointing and name calling incidents when we were in the third grade.  Can you remember, “Oh Yah … so’s your Ole Man.” Or how about the ever popular: “I am rubber you are glue, whatever you say bounces off of me and sticks to you.” It seems that many people have not advanced beyond Grade 3. While many  pundits  bemoan the lack of civility in 21st. century American political discourse  name calling is as old as the Republic. Usually, though, in the past, this kind of name calling and finger point was left to election time and the vagaries of the campaign mudslinging. The campaign food fights have bled over into governing itself.

Let’s be bi-partisan and note that two better models would be Bill Clinton and Ronald Reagan.  Both had a reputation for seeking common ground.  Today it is more common to hear “it is my way or the highway.”  Political negotiations have been replaced by ultimatum, executive orders, mass gibberish labeled legislation penned like a term paper written the night before it is due.

To the three cheers for our side mentality I might suggest at least one cheer for civility and decorum.   After all, we are all in this together.  Ben Franklin, at the time of the Declaration of Independence, was asked “what form of government have you crafted?  His reply was simply “A Republic if we can keep it.”  With looming debt extending as far as the eye can see and an economy growing at a snail’s pace, respect for the dignity of those who have policy differences is imperative.