Joining Pope’s Call to Pray and Fast for Peace 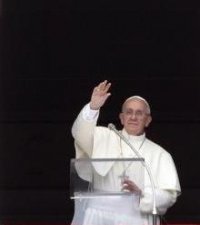 This Saturday Sept. 7 Pope Francis has asked the Universal Church to pray and fast on that day to honor Mary’s birthday (Sept. 8) and to fervently beseech the Lord for Peace around the world but especially in places like war torn Syria.

How fitting that Benedictine College is consecrating the college to Mary symbolized by the new 21-foot fountain topped by a statue of Our Lady of Grace going up on the quad.  We know nothing is impossible for God but also have the admonition from Scriptures “who knows the mind of God” and who can be His counselor.

We may not know the mind of God but we are called to hone our talents wisely seeking the wisdom of the Holy Spirit.

Tuesday morning Benedictine had our All-School Mass in the Abbey Church. During the homily for the mass, Fr. Pat York, a Beneductine College grad, reminded the students, that they should take their academic work seriously by partying less and studying more so they will be able to take advantage of the years they have here.  Then they must take their faith in action into the “public square.”  That might include writing letters, emails, to their representatives and letters to editor of newspapers around the country.  Like so many foreign policy decisions prayer is needed.

That is why Pope Francis called for the day of fasting and prayer.  He reminded us that violent actions don’t bring about peace.  Still there are justifications for its use otherwise why would people look at international norms of behavior for a guide to “Just Wars.”  Too often the use of force in the region is aimed to meet the “Just War” criterion which says that the action taken will leave the situation better than it would have been without the military action.

Ban Ki Moon, U.N. Secretary General, has questioned the legitimacy and possible consequences of any U.S. strike on Syria not based on:  a) approval by the U.N. Security Council or b) based on self-defense claims by the United States.  The problem with his statement where the United Nations is concerns is that it flies in the face of reality.  Any of the five permanent members of the National Security Council could veto such an effort to use force.  In fact both Russia and China have said they would oppose any US strikes on Syria.  Russia and Iran have bankrolled the Syrian regime which has unleashed Saran gas on its own people for, likely a second time.  No action by the UN or the US seems to assure President Assad of Syria that “red lines in the sand” can be covered by desert winds.

President Obama is making his case  for the use of force against the Assad government for its use of those chemical weapons  during a G-20 summit in St. Petersburg, Russia. Simultaneous the US Congress deliberates whether or how to respond militarily.  Meanwhile, Assad shamelessly positions innocent civilians and prisoners of war as human shields from the countryside to protect against attack aimed major Syrian defense facilities.  This tactic is reminiscent of the tactics of the Viet Cong during the late 1960s. Those revolutionaries put anti -aircraft guns on the tops of bridges, water treatment plants, schools and hospitals.  How do you negotiate with people who de-value human beings with such calculating and callous disregard for the God ordained dignity of each member of the human family?

War means casualties.  Modern war has brought innocent civilians into the crosshairs of cold blooded killing machines.  US Public opinion surveyed in a Washington Post/ABC News poll have indicated that a rather large plurality (56%) of the American public has little stomach for getting into another Middle East conflict especially if the United States goes in along.   The public is war weary.  Perhaps voters are quite cognizant of “mission creep.”  You say you are getting involved with limited force and things escalate.

Decisions to use force short of war (no boots on the ground) is invariably complicated by the tendencies to use force to respond to human tragedy especially where the victims are often children.  It almost always results in a call for more force.  In the Clinton years, for example, the US sent humanitarian food aid into Somalia and only to be forced to send marine and special forces to make sure the food was not stolen and given to the government’s military forces  instead of reaching innocent civilians.  The famous movie titled Blackhawk Down  portrayed a special forces helicopter being shot down by one of the sectarian groups and the U.S. special forces military personnel being dragged through the streets of the capital, Mogadishu is still seared in the national memory.

The charred ruins of the Benghazi embassy annex in Libya and death of a U.S. ambassador and those who came to rescue him more recently provides yet another cautionary tale.

Prayer and fasting are definitely in order if the world is to find its way out of the horror and morass that is modern day Syria.