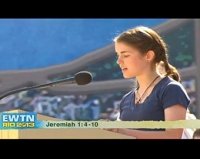 I just caught up with Katherine Bauman, who I know as a junior at Benedictine College in Kansas and native of Denver, but who more than 3 million young people know as “The American girl who did the first reading at the Pope’s World Youth day Mass on Copacabana Beach.”

Bauman, who is studying theology, education and classical languages at Benedictine went to Brazil with a group from the Christian Life Movement that did missionary work in Sao Paolo before the event. I interviewed her via Facebook on her first day back.

What an amazing journey you have been on — Rio, World Youth Day with the Pope, reading before more than 3 million people!

I just got back yesterday. I haven’t really had time to process everything yet — we were gone for almost three weeks and it was one of the most intense experiences of my life. I don’t know how long it will be before I feel like my head’s back on straight again.

I have to ask: What was it like lect0ring for the Pope? I got nervous the one time I lectored for a lowly archbishop.

Being onstage with Pope Francis was not the experience I had thought it would be, but it was certainly powerful. I was particularly struck by his simplicity, his humanity.

He is one of the biggest “celebrities” in the world, and it is clear that he hates the attention, yet he is radiant with joy when he is driven through the crowds. It is obvious that the excitement he displays at such times is not because he is in the spotlight — he does not see crowds, but people, persons, God’s children, and he loves each one of them for that.

He is a living example of his own call to truly encounter others, and his demeanor reminds me of the simplicity and accessibility of Christ in His humanity.

I formed my own impressions of Francis’ message as an observer reading World Youth Day talks online. As someone who was there, what did you feel was Pope Francis’ main message?

I think perhaps the most important call of World Youth Day is this call to truly encounter those we meet.

The WYD theme was “go and make disciples of all nations.” Practically speaking, I think that entails two things. First, we must encounter Christ Himself; there is no way to bear lasting fruit if we do not do this. Second, we must allow Him to touch the lives of those around us, and this will come from our concerted effort to have true encounters.

All other aspects of mission stem from these.

World Youth Day was an opportunity for millions of Catholics to come together to learn, to suffer, to celebrate together. We were given the chance to see the universality of the Church, and we were given encouragement and excitement as we fed off of the energy and the experiences of one another. We have been fed, we have received a call — now it is time for us to go out and be missionaries in our own communities. I think the real fruit will begin to become apparent in the coming months and years.

You did a little bit of that during this trip. What was it like doing mission work in Brazil?

I was first of all struck by the openness of the culture in Brazil — it’s a culture of the heart and a culture of the family. I think we have a lot to learn from this, beginning at the level of everyday encounter with other people. Our culture is one in which it is accepted and expected to come in contact with many people in the busyness of a typical day, but to truly encounter very few.

As a friend of mine very aptly put it: In America, we get together with our friends and talk about things — sports, school, career; in Latin America, they talk about people — in the sense of wanting to understand what the other is living, not in gossip. Reclaiming the authenticity of human encounters, whether in prolonged conversation or in a simple glance given to the cashier at the grocery store that recognizes the human dignity of the other is something desperately needed in our society.

The pope asked us in one of his addresses to put this at the heart of our mission. Its presence in Brazil, particularly in the favela— the slums — in which we did mission work before World Youth Day, is a witness to the possibility of this revival.

Honestly, the most impactful part of my experience reading at the Mass has already been explained. I wasn’t nervous, probably because it wasn’t about me anyway.

Getting to be that close to the Holy Father, though I didn’t understand a single word of the Mass, was powerful not in an emotional way, but in that I was able to watch him, and I saw his simplicity and his humanity, and it changed the way I understand Christ.

Christ is God, but he is human, and simple and accessible to us in His humanity. That kind of an experience can’t fail to change your faith and your prayer life.