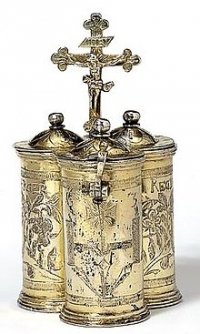 The world is charged with the grandeur of God.

As Pope Francis’ fellow Jesuit, Gerard Manley Hopkins, wrote, God’s presence is energetic and all-encompassing. And men of our age have grown numb to it: Why do men then now not reck his rod?

How then are we to reconnect with God’s life-giving presence?

Pope Francis’ homily at the Chrism Mass on Holy Thursday gave one crucial answer:  through the unction of our priests.  In an age when the priesthood has experienced scandal and a crisis of credibility, the Holy Father challenges priests throughout the world to be the means by which God communicates his greatness. We might call this a “trickle down” theology of the priesthood.

The oil of a priest’s anointing, said the Holy Father, must pour over his head to his shoulders, and down his vestments, in which he carries the burdens of his people:

“This means that the priest celebrates by carrying on his shoulders the people entrusted to his care and bearing their names written in his heart. When we put on our simple chasuble, it might well make us feel, upon our shoulders and in our hearts, the burdens and the faces of our faithful people, our saints and martyrs who are numerous in these times.”

It gathers to a greatness, like the ooze of oil / Crushed.

Yes, this oil must reach the edges of the priest’s vestments and pour over his people, as balm and healing and oil of gladness.

“The precious oil which anoints the head of Aaron does more than simply lend fragrance to his person; it overflows down to ‘the edges’. The Lord will say this clearly: his anointing is meant for the poor, prisoners and the sick, for those who are sorrowing and alone. My dear brothers, the ointment is not intended just to make us fragrant, much less to be kept in a jar, for then it would become rancid … and the heart bitter.”

The priest is to be judged by whether his people have the joy of faith, whether the faith is communicated to them in a way that eases their burdens.  The priest is to sense, in every prayer request, even in the most banal, “the desire of our people to be anointed with fragrant oil, since they know that we [priests] have it.”

And so the priest must take this anointing to the “outskirts,” to the margins, where it is most needed.  The Holy Father gave example himself by officiating Holy Thursday’s Celebration of the Lord’s Supper in a juvenile prison, and washing the feet of the prisoners.

And all is seared with trade; bleared, smeared with toil; / And wears man’s smudge and shares man’s smell:

The priest’s life is to be an extension of Christ’s mission of saving, healing, teaching, offering the constant invitation to share Christ’s Cross, whose yoke is easy and burden light. The priest who doesn’t go outside himself will end in sadness and will not yield much fruit.

“Those who do not go out of themselves, instead of being mediators, gradually become intermediaries, managers. We know the difference: the intermediary, the manager, ‘has already received his reward’, and since he doesn’t put his own skin and his own heart on the line, he never hears a warm, heartfelt word of thanks. This is precisely the reason for the dissatisfaction of some, who end up sad – sad priests – in some sense becoming collectors of antiques or novelties, instead of being shepherds living with ‘the odor of the sheep’. This I ask you: be shepherds, with the ‘odor of the sheep’, make it real, as shepherds among your flock, fishers of men.”

The crises of the world  make it imperative to go “out into the deep” to spread the Gospel. The Pope sees this as a good thing. What animates him, and what should animate every priest, is the firm faith in God’s power working within them, in the love that they bear from Christ to each soul in the world, and the unflinching hope that There lives the dearest freshness deep down things. That God is far more powerful than our accumulated weaknesses.

Holy Thursday leads to Good Friday, where we celebrate Christ’s ultimate sacrifice on the Cross for us. He gave his life that we may share his life. We do this through grace, a sharing in the divine life. And we have that anointing of grace trickling down from God through his ministers, and given to us, in such a special way, in the sacraments.

Let us pray for the Holy Father, and for priests everywhere to be renewed by Pope Francis’ words and example.

“Dear priests, may God the Father renew in us the Spirit of holiness with whom we have been anointed. May he renew his Spirit in our hearts, that this anointing may spread to everyone.”

Because the Holy Ghost over the bent  / World broods with warm breast and with ah! bright wings.