Living to Tell the Tale 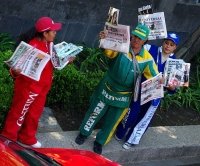 What tale do we live to tell? And how well do we tell it?

We are celebrating the sesquicentennial of a pivotal year in the Civil War. Survivors of Pickett’s Charge in the Battle of Gettysburg commemorated that ill-fated dash across the field up until the beginning of World War I.

Next year we will celebrate the centennial of the beginning of World War I. The last veterans of that war, America’s Frank Buckles and Britain’s Florence Green, died in 2011 and 2012, respectively, both at the age of 110. No one is alive to tell the tale. It is no longer a living memory.

Someday that will be true of World War II, and the Lunar Landing, and 9/11… There will be written documents and immense volumes of digital sources, but not one person left to interview, no one with firsthand experience.

That also happened regarding our Faith. After the death of the last Apostle, came the age of the Apostolic Fathers, then succeeding generations in the Early Church.  It became rarer and rarer to find someone who knew one of the Apostles. The difference is that the firsthand experience of God did not end there.

When I was studying in Rome in the ‘80’s and ‘90’s, everyone had seen John Paul II. It was not a big deal. The students I teach now are amazed that I saw him not once but many times, and even met him a few times.  He is a distant memory for those born in the mid -90’s, who remember him as a kind but frail old man, on TV, when they were in grammar school.

And yet, I always get teary-eyed when I tell them about how I saw him pass by in front of Madison Square Garden in 1979. I was in the 9th grade, a teenager thirsting for authenticity in life. And Blessed John Paul II was authentic, and I knew it, and he looked at me (and the thousands around me) and I knew that I wanted what he had… an experience of God that was real.

Some of my students went to Rio this summer and saw Pope Francis. And I see in their eyes that they saw and experienced something real.  And I see that in the prayer life and the sacramental life on this campus.  And the experience of God for these people is undeniable. And they will remember it, but only if they pass it on.

Pope Francis spoke to Catechists on Sunday, and told them that they are “the memory of God.” That they are entrusted with reminding a new generation of who God is and what He has done in their lives.

You will not go to bed tonight before you see a roadside memorial, or a tattooed limb, or the back glass of a pickup truck, or the next mile of highway maintenance, dedicated to the memory of a loved one. We spend time and effort so as not to forget the ones we love.

But we must remember first of all, above all others, the very One by whose love we walk this earth. The purpose of our existence is to tell that tale. When we live for something else, for something so much less than that, like the rich man in Sunday’s Gospel, we lose ourselves. We become people without faces:

“Let’s try to think: How does something like this happen? How do some people, perhaps ourselves included, end up becoming self-absorbed and finding security in material things which ultimately rob us of our face, our human face? This is what happens when we become complacent, when we no longer remember God.”

Last week Mariano Rivera pitched his last game at Yankee Stadium. He handed over the ball to his teammate Andy Pettitte and wept on his shoulder. And I wept watching him, knowing that something amazing, something historic for the game of baseball, a truly excellent career, was over. And I thought about my Dad watching DiMaggio’s last game, or Mickey Mantle’s.  So much for “There’s no crying in baseball…”

“There are tears in things,” says the Roman poet Virgil, “and mortal things touch the heart.”

That is so true, and the tears would only be of desperation, were there not something far beyond mortality: Jesus Christ, whose Death conquered death. THIS is the tale our lives must tell.

“The catechist, then, is a Christian who is mindful of God, who is guided by the memory of God in his or her entire life and who is able to awaken that memory in the hearts of others. This is not easy! It engages our entire existence! What is the Catechism itself, if not the memory of God, the memory of his works in history and his drawing near to us in Christ present in his word, in the sacraments, in his Church, in his love? Dear catechists, I ask you: Are we in fact the memory of God? Are we really like sentinels who awaken in others the memory of God which warms the heart?”

The first and best method of Evangelization is to share the great things God has done in your life. For the tale of salvation is the tale of each one of us, and a God whose love has drawn us to Himself and shared his life, his joy and his own overflowing goodness with us.

And that is too good not to share. If we don’t tell that tale of Good News, we become sad and faceless individuals, whose lives strive to scratch meaning from the walls we build around ourselves. And woe to us if there come a day when no one is left to tell the tale.

We must persevere even in order to continue to be who we are. And who we are is a people made in God’s image and likeness, fallen in sin but redeemed by Christ, whose lives must sing the story of Salvation.