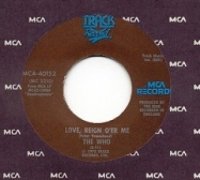 For the past few years, the last week of Ordinary Time finds me thinking of Adam Sandler, Quadrophenia and the seemingly impossible weight of my fallenness.

Allow me to explain the intersection of these three thoughts in my cerebral circuitry.  Around this time a few years ago I rented the DVD of Reign Over Me, a movie in which Adam Sandler delivers a solid dramatic performance portraying Charlie Fineman, a man who has lost his wife and three daughters when their plane hit the World Trade Center on 9/11.

Charlie is a wreck, a shell of a man, who defends himself against grief by playing video games, jamming on his guitar, having his kitchen remodeled again and again, and riding the streets of New York City on a motorized scooter while cranking his I-Pod. His in-laws take his emotional isolation as an insult, since he will not even acknowledge he had a family, and shuns pictures and any mementos. When he reconnects with a college buddy, they bond only because his friend (played by Don Cheadle) doesn’t ask him about his family.

In a dramatic courtroom scene, pictures of Charlie’s wife and children are shown, and he puts on his headphones, screaming the lyrics. The song, which gives the movie its title, is Pearl Jam’s cover of “Love, Reign O’er Me” from the album Quadrophenia by The Who. The album itself is a “rock opera” which tells the story of a London teen in the mid-sixties with dissociative identity disorder, and this schizophrenia, along with the band’s experimentation with quadrophonic sound, accounts for the album title.

The movie has its shortcomings, and I am far from suggesting that The Who be used as liturgical music. So why do these random thoughts occur to me during this last week of liturgical Ordinary Time?

As a fallen creature, I too find myself sometimes disassociated from my true identity as a baptized son of God. I can retreat within myself instead of reaching out to God and to those He has put in my life. I try not to think too deeply, and escape in ways of my own, not too far away from Charlie Fineman’s music and video pursuits.  And when forced to confront the truth about myself, I frequently am among those who fight to shut it out.

In those moments, the phrase “Reign Over Me” becomes a prayer, even one unwittingly uttered. Even one screamed as a last defense against despair. Feeling closed off from the sources of love, I become the parched land of the Psalmist: “I stretch out my hands toward you, my soul to you like a parched land.” (Ps 143:6 NAB)

The desire for Christ to reign over me, to exercise his Lordship over my life, often comes from me finally admitting to myself that, if I don’t let Him rule over me, something else, something terrifying, will. I am not a being created to rule my own life. I all too often sell myself to the lowest bidder. If I look honestly at my life, I am forced to admit that there simply is no second best to Jesus Christ. My choice is between Him and an abyss of nothingness and radical frustration that can truly become eternal.

Pete Townsend of The Who did not write the song drawing on Christian influences. In fact, he based it on a comment by Indian guru Mehmer Baba that rain comes from God, and that the thunder is his voice. That same thunder rings out with the same Christian and Hindu echoes in TS Eliot’s “The Wasteland.” In both the poem and the song, the speaker is a parched wasteland who needs yet fears the water, and whose struggle with despair becomes an invocation.

As the Year of Faith comes to a close, I have been trying to take stock of what it has meant for me. I would have to say that one constant light this year has been how my own littleness points to God’s greatness.

Left to my own devices, how lost, how forgotten, how useless I am. But a glimpse into my own nothingness without God has also been a grace.

We cannot value a Savior until we shudder at what we have been saved from. Jesus Christ has offers us the only chance there is for true wholeness and fulfillment.

As a fellow patient says about Charlie Fineman, “Can’t they see that this man has a broken heart?”

Our hearts are all broken, radically. Sin is a rupture in the very fabric of our being. We are fallen, we are falling, and only by God’s merciful condescension in his Incarnation and Passion for us do we have any hope of fulfillment.  The parched wasteland of our lives can only be made fruitful by the ocean of mercy, for we are born with a thirst for a love that no created love can quench. “Only love can make it rain / The way the beach is kissed by the sea.”

It is only within a knowledge of how lost we are without God that we can experience afresh what Pope Francis has used for the title of his first apostolic exhortation, “The Joy of the Gospel.”

As these last weeks of the liturgical year bring us to reflect on our mortality and our radical need for Christ and his reign in our souls and in our world, let us enter upon Advent in hope, but still crying out from our emptiness “Ye Heavens, open from above, that clouds may rain the Just One!”