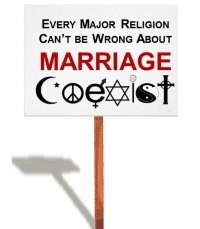 March 19 is the feast of St. Joseph, Husband of Mary. Nine days later, the Supreme Court takes up arguments about same-sex marriage.

First, let’s be clear what we are not praying for.

We wish no ill will to homosexual couples. We Catholics believe with the Catechism that  homosexual men and women “must be accepted with respect, compassion, and sensitivity. Every sign of unjust discrimination in their regard should be avoided.”

We want to help them live their lives in harmony in any way we can. But toleration of homosexual couples need not mean redefining marriage.

That’s what we are praying for: marriage.

Marriage exists because the state has a great stake in what happens to a man and a woman who have united their lives. The state wants to encourage and protect these couples because of what they uniquely provide.

For one thing, marriages provides a healthy next generation. Simply, marriage benefits those couples who, in the natural course of events, will be the ones to devote time and resources to raising the next generation.

But the state doesn’t have a stake in marriage only because of a future benefit. Marriages also improve current generations. It is almost trite to say it, but it’s true: Becoming parents changes everything. When we are single, we may care about what things are like for everyone, now. But parents live for their children. Parents care what things will be like for everyone, 30 years from now. And that transforms couples’ behavior and decisions.

This is why marriage is the basic building block of society: It is the institution that makes one generation focus not on itself, but on the next generation.

The problem with same-sex marriage is that the definition of marriage has to change in order to “include homosexuals.”

Marriage has to cease being the state’s recognition that procreative couples are important to society and instead become merely the state’s decision to keep a record of people who declare that they love each other.

But this new definition of marriage — the state’s acknowledgement of romantic love — immediately becomes problematic for a number of reasons. Brendan Vogt explores them in this helpful Our Sunday Visitor article.

For one thing, once you take the procreative aspect of a relationship out of the equation, what boundaries are possible for your definition? What’s to stop “marriage equality” for polygamists? In its regulation of procreative relationships, the state legitimately bars incest. How can it do so in relationships based solely on romantic feelings? If “love makes a marriage” why can’t loving cousins (or those in closer family relationships) marry?

For another, redefining marriage entails an aggressive secularism. Every major religion believes that marriage is heterosexual. So, in order to enforce same-sex marriage you have to run roughshod over every major religion. Businesses are already facing fines and penalties for refusing to serve same-sex weddings. Suddenly, to practice your religion — whether you be a devout Muslim, devout Hindu, devout Jew or devout Christian — is bigotry in the eyes of the law.

Catholic adoption agencies have already been closed because of Catholic beliefs about marriage. The attacks against Muslim, Jewish, Hindu and Catholic religious freedoms will only grow in the wake of a same-sex marriage ruling.

So, starting on the feast of Joseph, Husband of Mary, and ending on Tuesday of Holy Week,  pray in the next nine days for marriage. Here is the U.S. Conference of Catholic Bishops’ prayer, with an invocation to St. Joseph added.

Prayer in Defense of Marriage

God our Father, we give you thanks
for the gift of marriage: the bond of life and love,
and the font of the family.

The love of husband and wife enriches your Church with children,
fills the world with a multitude of spiritual fruitfulness and service,
and is the sign of the love of your Son, Jesus Christ, for his Church.

The grace of Jesus flowed forth at Cana at the
request of the Blessed Mother. May your Son,
through the intercession of Mary, pour out upon us
a new measure of the Gifts of the Holy Spirit
as we join with all people of good will
to promote and protect the unique beauty of marriage.

May your Holy Spirit enlighten our society
to treasure the heroic love of husband and wife,
and guide our leaders to sustain and protect
the singular place of mothers and fathers
in the lives of their children.

Father, we ask that our prayers
be joined to those of the Virgin Mary,
that your Word may transform our service
so as to safeguard the incomparable splendor of marriage.
We ask all these things through Christ our Lord,
Amen.