Marriage: What the Supreme Court Said and Did Not Say 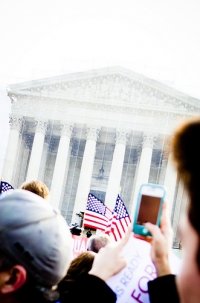 On June 26, the Supreme Court, as it prepared to go into recess, made two much ballyhooed decisions. One was the U.S. v. Windsor and related to the Defense of Marriage Act (DOMA) and Hollingsworth v. Perry; the other addressed California Proposition 8, on how marriage would be defined under the state constitution. For the entire decisions the high court’s blog provides the actual court findings or a shortened syllabus of the cases.

Headline writers have had a field day reporting on the “historic” decisions as “liberation” for same sex partners. Those of us who support the sanctity of marriage must examine these cases carefully as they may be setting the foundation for court sanctioned social change to come. These two decisions in some ways may have muddied the waters further, while also moving the legal arguments further down the line toward legal support for same sex unions.

Justice Antonin Scalia in his scathing dissent in the DOMA case saw the direction the logic was going on these issues and reminded us that it is important to recognize that the logic of the law builds on the language in earlier cases. Scalia noted thathe was “waiting for the other shoe to drop.”

The Roe v. Wade case in 1973, legalizing abortion in all 50 states, and Lawrence v. Texas in 2005, invalidating anti-sodomy laws and ending limits on sex between consenting adults of the same sex, were based to a large degree on the principles related to liberty and privacy and personal autonomy enunciated in Griswold v. Connecticut in 1968 which dealt with contraceptive availability for married couples.

How ironic that personal autonomy and privacy concerns are now being trotted out to defend the enactment of assisted suicide laws in a number of states. In effect, a person’s right to not give birth has morphed into a person’s right to die when and how he or she wishes, using the same logic of privacy first uncovered in Griswold v. Connecticut. For clarity sake, at this point, we need not go too much further into the legal weeds.

It is only in recent decades that the definition of marriage has become controversial. This should come as no surprise. At one time apple pie, motherhood, and the American flag were standards. Today apple pie can give you cancer and make you obese. Motherhood has been characterized as a “disease” which threatens the personal equality goals of women. The American flag is subject to burning, being stomped on and being rejected as a symbol of jingoist imperialist thinking.

Some attitudes can change virtually overnight. Even as recently as 2008, Democratic presidential candidate Barak Obama felt free to say that he believed that marriage should be between one man and one woman. In a span of four years President Obama first said he was reconsidering his views and that his views were evolving. Finally, he did a complete 180 to support same sex marriage. Pew Charitable Trust data would demonstrate that public attitudes on same sex marriage seem to be in flux as well.

DOMA is the acronym for a 1996 the federal law which, once enacted by Congress, limited federal spousal and family related benefits to male/female unions only. It was signed by President Bill Clinton. The Court in the recent 2013 Windsor case said that in the states where same-sex marriage was allowed, DOMA did not permit same sex partners to receive federal benefits for married male-female marital unions.

Justice Kennedy, writing for the majority, said that the benefits were being denied to same-sex couples who he felt deserved them under equal protection of the law. Kennedy also implied that DOMA was pernicious because he felt it was intended not for the benefit of all but to stigmatize same sex couples and could delegitimize them in the eyes of any adopted children they might have.

Given all the media hype about this we might find it useful to synopsize what the Court did and didn’t do in these cases.

Some things these cases did do:

1. Promised to provide federal benefits to people in same-sex relationships in states where same sex marriage was already legal. (The Windsor case related to DOMA)

2. Told the citizens who put the successful Proposition 8 (defining marriage as between a man and a woman) on the ballot in California that they did not have the right (standing) to sue which a federal court (U.S, Ninth Circuit Court of Appeals) had given them.

3. Sent a California case (Hollingsworth) back to the Ninth Circuit with instructions to follow federal standing guidelines and in doing so insured that in California only, all past same sex marriages would be legalized again.

4. Left the constitutionality of same-sex marriage itself open to further legal action by future courts.

Some things the Supreme Court (SCOTUS) did not do in either case:

2. The court did not require states to enact legislation permitting same-sex marriage. Doing so would have overturned laws in the 40 or so states which recognize by law or their constitutions that marriage is between one man and one woman.

3. The court did not clarify how civil unions for same sex couples with the same benefits as provided in states like New Jersey and Illinois would be affected.

In a coming post, we should examine the divisions on the court over these issues, techniques that executives use to get around enforcing laws like DOMA, the implications for respecting the rule of law these tactics could engender and sexual morality in an age of relativism.