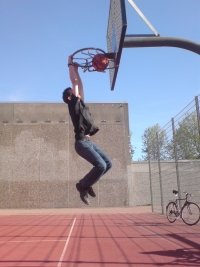 It’s NBA playoff season, which seems to last six months. That makes the whole season last about fourteen months.  I guess, March Madness aside, I’ve soured on basketball ever since my playground days. I hit five-foot one my sophomore year in high school, and, more than acutely stricken with the jumpless Caucasian contagion, I was nobody’s first pick for three-on-three.

Occasionally, a good friend, who could drain threes seemingly at will, would throw me a bone. But that was mostly to hear my self-deprecating wise cracks after I air-balled, or to laugh with (?) me when a swat down from my opponent made me taste Wilson leather for a week.

Yes, I was a mercy pick.

This morning’s Gospel was about the Rich Young Man, the guy who thought he had game. He had aced the commandments so far. (Anyone else out there? Didn’t think so.) Jesus picks him for his team, but makes it clear that there’s room for improvement. He doesn’t deserve a spot on the squad. He needs to give all his riches away. He has to give up the idea that he is the man. He has to realize that he is basically a mercy pick.  It takes humility and detachment from self for that.

The Rich Young Man walks away sad. He could have been a sixth man on a championship team. Instead, we can’t even play his highlight reel with a backing track of Fort Minor’s “Remember the Name.” Because we don’t know his name. He wanted to be a Somebody, and ended up a no name.

Pope Francis’ episcopal motto, which he has kept as his papal motto, comes from a commentary by St. Bede the Venerable on the Rich Young Man passage. Miserando atque Eligendo.  Jesus looked at the Rich Young Man, “having mercy and choosing.”  Yup.  A mercy pick.

We have to give up the notion that God needs us. He may choose to need us, but that is not really needing us. If this were three-on-three, it is you, me and Lebron against some scrappy playground rats. He can score whenever he wants. If we get a pass, or if we even score because the brick we threw somehow banked in, it is because God wants us to feel like we’re contributing. It’s not because He can’t go it alone.

That hurts, but it’s true. God sets the ground rules, and, in his game plan, we are the little guys, we are the ones who need Him. We are not the ones racking up double-doubles.  It is only by God’s mercy and his choice that we get the occasional assist. But the good news is that we are not going to lose.

Even if the season of Salvation History lasts thousands of years (barely edging out the NBA), we are guaranteed a ring if we stick to his game plan. We don’t get to set the plays, or hog the limelight. We get to execute. And we get to share the glory, a glory that shines from Him to us, not the other way around.

One reason Pope Francis has been and will be a great pope is because he sees himself as a mercy pick.  God didn’t choose him because Francis is great, but because God is great. Miserando atque eligendo.

It is going to be something to watch this humble, unassuming soccer fan feed the Lord a pontificate full of stunning alley-oops.