Obama Scandals and the Chicago Way 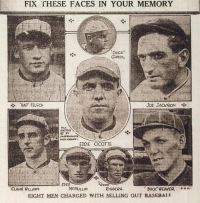 Chicago, 1919. The quintessential scandal in American sports. The “Black Sox” affair involved disgruntled Chicago White Sox players and hardened criminals “fixing” the World Series, throwing games so that the Cincinnati Reds would win. In short, it was fraud to secure what one wanted. Intentionally underperforming in order to get a desired result, and thus cheating the public of their due (in this case, the best and noblest efforts of all players involved.) Eight players were banned for life, including third baseman “Buck” Weaver, who played some of his best baseball in that series, but whose crime was knowing about the fix and not reporting it.

Chicago has a long history of such scandals. A façade of honesty with an underbelly of corruption and backroom deals. (Sadly, some allege that our first Catholic president was helped thanks to a Chicago-style voter fraud scandal.) It’s not that other cities are choirboys, but just google “the Chicago way” and you’ll see what I mean.

The latest scandals to rock the Obama administration seem to be cut of the same cloth, and should be dealt with in the same way the Black Sox scandal was. (Either that, or we reinstate the Black Sox and give up on our experiment in democracy.)

Public officials swear an oath to protect and defend the Constitution. The Constitution’s famous preamble states the purposes for which the whole document was “ordained and established.”  To deviate or thwart those purposes is the worst kind of treachery. It amounts to a high jacking of American politics. High jacking here is a very intentional metaphor. A high jacker seizes control of something and deviates its course from its intended destination to a destination of his own choosing.

The government exists “in order to form a more perfect union, establish justice, insure domestic tranquility, provide for the common defense, promote the general welfare, and secure the blessings of liberty to ourselves and our posterity.”  The verbs are important. They were chosen carefully by men who were careful about words. These are the words ratified by the States.

Anyone who did this, -and anyone who knew about it and did not report this-, should be banned from public service, forever. (Both “Chick” Gandil, who brought the scandal to the Black Sox, and “Buck” Weaver, who failed to report it, were banned for life.) “Sorry” didn’t cut it then and it shouldn’t now.

In this case, if this proves true, they have blood on their hands. But even had nobody died, those involved in the decisions should be banned from public service forever, no matter how high up the chain they are.

Scandals have always existed in politics. There is always a temptation to abuse the public trust to further individual aims. But what we are seeing is, in my opinion, more dyed-in-the-wool.

It is very 21st century, and not in a good way.

I think the fundamental flaw of the Obama administration may just be a failure to understand, -or a willful misunderstanding of,- the purpose of government as stated in the preamble. Instead of “promoting the general welfare” and “securing the blessings of liberty,” the administration’s actions (even when no overt scandal is involved) seem to aim at “securing the general welfare” based on a narrow, partisan definition of what such welfare entails.

Is the government’s job to play baseball against its perceived opponent while the people umpire? Or does the government ensure rule of law and fair play while different social groups play an amicable game on the field?

Where different visions of what “general welfare” means are operative, is it impossible to secure that welfare and at the same time spread freedom (= “secure the blessings of liberty.”).

Imposing one’s own narrow vision of welfare, in this case “health,” lies at the core of the scandal surrounding the HHS mandate. (See Tom Hoopes on the similarity between the HHS and the IRS issues.)

The general welfare is best promoted by securing the blessings of liberty.  It gives everyone a chance at the pursuit of happiness.  The authors of the Constitution knew that one could not “secure” the general welfare. The best one could do was to “promote” it by giving everyone an equal chance. That’s what “secure the blessings of liberty” means.  In baseball terms, the government’s job is to umpire a game according to the rules, not to fix the result.

One doesn’t need to be Superman to stand for “truth, justice and the American way.”

To stand merely for partial, official talking-point “truths,” and a targeted, uneven application of “justice” may be the Chicago way, but not the American way. It is an abuse of the public trust, even if it may not technically have been illegal.  The Black Sox players were acquitted in court, but were still banned from baseball.

America is America because of the rule of law. It is one of the few countries on earth where you can expect the police and the government not to cheat you.

If we are to allow these scandals to continue in America, then we should at the very least be consistent. We should reinstate the eight banned Black Sox players immediately. Then we should scrap the Constitution.