Only You Can Stop Childhood Mental Obesity! 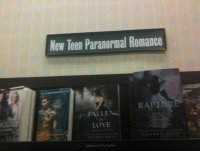 For a seminar entitled “Text and Worldview,” in which a group of students (from different majors) and I read books and watch films and discuss the worldview of the author/producers, I had assigned Evelyn Waugh’s wonderful satire on Hollywood, The Loved One.  Wanting to re-read it as the class approached (yes, professors read the homework they assign) I was surprised that it was not on my shelves, and I concluded that I had lent it out and would never see it again, record-keeping not being my strong suit.  Since my wife and I were to have a dinner not too far from a northern Kansas City Barnes and Noble, I figured I could pick up a copy.

Wrong. I could only find two old copies of Brideshead Revisited. That, at least, kept me from rending my garments. But it was not what I could not find that scared me about this visit to a big box bookstore; it was what I did find.

The Loved One, for full disclosure, is an anti-love story of sorts that takes place within the bizarre world of a California mortuary. (I am not recommending it for high schoolers unless a good teacher guides them through it.) And yet, part of the book’s power is depicting that world as solely concerned with externals and lacking in any sense of the supernatural. One of the central characters is a mortuary cosmetician, and Waugh was basically ranting at America for missing the point (the theological undertones) of Brideshead and calling our flashy culture nothing but gaudy make-up on a corpse.

The popular novels for young people these days are nothing like Evelyn Waugh. They use occult forces to further entwine emotional tales where horror meets hormones. And yet, when I pointed out to a would-be book buyer that there are better things that her child could read, she replied, “She loves these. I am just glad she is reading something.”

I understand. At least she is not a video-game junkie or addicted to TV. But, I ask… is this much better?

Think about it. If a doctor pointed out that a steady diet of Big Macs was making her daughter unhealthily obese and sluggish, would the mom answer “With all the anorexia out there, I am just glad she is eating something”?

Beyond the problems that come from overindulging in emotions, (something that can stunt growth toward adulthood, and which Sarah Swafford has aptly called the emotocoaster,) it is my curmudgeonly contention that such reading stunts intellectual growth as well. Poorly written, hackneyed prose with banal characters cashing in on the formula du  jour. And today, that formula is turning the occult and the satanic into what the cute kids do.  (“Yes, my son has painted his room black with an inverted pentangle on his ceiling, but with so many teens indifferent to religion these days, at least he’s praying to someone.” Sheesh.)

We wanted them to grow up big and strong. What for, if they don’t also grow up noble and virtuous?