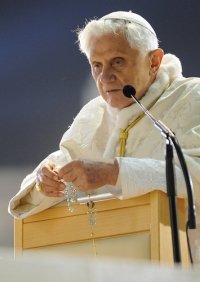 By Stephen D. Minnis | Stephen Minnis is the president of Benedictine College.

It was very moving to see our students gather for a Day of Prayer Mass of Thanksgiving for Pope Benedict XVI. As his pontificate came to a close, we prayed a Memorare for this great man, and then the Abbey bells tolled for him for ten minutes. (See the college’s coverage of the event here.)

But even though we know he has gone into a new phase in his life, we know that his great love for the Church remains.

Previously, I called Pope Benedict XVI “the professor Pope.” That fits, but in thinking over his pontificate and the way in which it has coincided with my presidency at Benedictine College — he was more than an intellectual leader. He led with love.

In my first year as president, it was surprising to me how emotionally our students mourned the death of Blessed John Paul. However, their moods changed dramatically when Cardinal Ratzinger was elected and took our school’s patron saint as his name. I don’t know how many schools had a “Pope Party” that day, but we did.  I still remember Abbot James Albers (he was Prior James then) standing on a chair in the roost, blessing St. Benedict Medals and tossing them to people.

When our very own Archbishop Joseph Naumann from Kansas City-Kansas received his pallium in Rome that year he told Pope Benedict that he was proud of the Catholic college he had in his diocese, Benedictine College. He told the Pope how much we celebrated “when the new Pope named himself after our college.” He said Pope Benedict laughed.

Pope Benedict XVI’s pontificate has been dedicated to love from his first encyclical, Deus Caritas Est (God is Love), on. For years, I have been interviewing all potential faculty members at Benedictine College, and I always tell them that one of the distinctive features of our campus is that we do not just teach our students. We love them.

I was blessed to be able to attend an audience with the Holy Father when he visited America, and he shared exactly that advice with Catholic university presidents in Washington: Love your students. In other words, the Pope stole my line! But I guess if anyone is going to use my material, I am glad it is the Pope.

In fact, now that Pope Benedict has said it, I am even more insistent that the essential hallmark of a truly Catholic education is that our scholarship is based on love. As Pope Benedict put it, “to lead the young to truth is nothing less than an act of love.”

Those of us who got to be with Pope Benedict XVI at the Ecclesiae in America conference last December cherish the opportunity to have seen him at the very end of his pontificate (though we didn’t know it at the time.) We saw a man who has indeed grown frail in his old age. But we also saw his great heart. We saw a model of Christian love.