Pope Francis and the ‘Dirty War’: The Press Is at It Again! 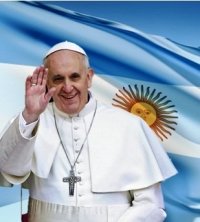 In its treatment of Pope Francis and Argentina’s“Dirty War” (1976-83) the press is repeating a familiar behavior.

It seems that secular media must dig up scandal about popes who are not willing to toe the “modern” progressive line and accept more “tolerant” views of abortion, euthanasia, embryonic stem cell research, and accept “adjustments” in the conception of marriage and family. Pope Francis would clearly fit the description of a pope who would attract the innuendos and disdain and slander of the media illuminati.

First it was “Hitler’s Pope” and the crusade against Pope Pius XII for not doing enough to stop Hitler’s assault on Jews during World War II. If enough people could just read the Scarlet and the Black or see the movie about the Irish Monsignor Hugh O’Flarherty (played by Gregory Peck) who used multiple disguises to find Jews and hide them from the SS and Italian intelligence by sneaking them into the Vatican until the end of the war, that should be enough to put that slanderous impression to rest.

One might ask why the Jewish mayor of Rome converted to Catholicism and took the baptismal name Eugenio (the Pope’s name was Eugenio Cardinal Pacelli.)

He must have known quite a bit about the Papal efforts to hide Jews in monasteries and convents across Europe. Jewish leaders more recently have come to his defense as a strong friend of the Jewish people. There is an insightful article about this on one of my very favorite Catholic websites, CatholicEducation.org. Pius knew the reality of the Serenity prayer, which reads in part, “God grant me the serenity to accept the things I cannot change, the courage to change the things I can, and the wisdom to know the difference.”

Pius actively, but with profound wisdom, did what he could to help the Jews around the world but also lived to fight another day by acting, very effectively, off the radar screen of those who could have stopped his efforts altogether. Better to save some lives than none at all.

Next came the defamation attempts on the newly selected Pope John Paul II for not doing enough to fight the Germans and then the Russians in occupied Poland. Hints of anti-semitism laced these pieces of “investigative journalism.”

George Weigel, the pre-eminent papal biographer of Pope John Paul II has sliced and diced that calumny in his two volumes titled Witness to Hope and the End of the Beginning.

The next Pope Benedict XVI was pilloried for having been a member of the Hitler Youth despite the fact that he had no choice in the matter and he and his family clear showed their opposition to the philosophy of the Third Reich. One might wonder if the response to Benedict XVI might have been different had he been more “modern ,” “realistic” and “flexible” rather than standing firm on virtually 2,000 years of Church teaching.

Now it is Pope Francis who is in the crosshairs for actions he purportedly did not take to defend two Jesuit priests who were complicit with the astounding violent Marxist Montenero rebels.

Those who live in Argentina and are not tied to the present Kirschner government with its support of abortion, euthanasia and recently redefinition of marriage by decree, paint a much more nuanced and I would argue accurate portrayal of Jesuit provincial Bregoglio who put his own safety on the line to get the two priests freed.

After his election as Pope, rumors started in the press that he did not do enough to protect two of his Jesuit brothers who had been kidnapped by the Argentine navy back in the 1970s.

Between 1976 and 1983, people were disappearing often after military arrest as the military in power. It still gives me chills to think of conversations I had with Chilean and Argentine military officers in conferences at the National Defense University (Ft. McNair, Washington, D.C.) in the late 1970s about why they felt they needed to arrest people, herd them into soccer stadiums, torture them and eventually execute them even as their families waited for word of the whereabouts of their loved ones.

Their excuse was, “You Americans can’t understand the need to do such things since you have never had to deal with a Communist insurgency that is bent of the destruction of your nation.”

The insurgency, the Monteneros in Argentina’s case, were committed Marxist revolutionaries who found social justice not in the words and example of the crucified Christ but at the end of gun. Those who have seen the movie Romero about the late assassinated Archbishop from El Salvador, know that foreign missionaries and domestic clergy can go from advocating for justice for the poor to taking up arms against the oppressor.

Too often that is not only the unwise approach but is in violation of everything Christ spoke for in the area of justice.

Every time I hear people speak of Christ as revolutionary it makes me cringe. He did not need to take up arms against the religious and military leaders of His day. He had all the power he needed to right the wrong. Instead of becoming a asterisk in history along with others who rebelled against Rome, he gave a more powerful message of love and forgiveness from the cross. Empires have come and gone, but the kingdom of Christ endures.

Pope Francis does not strike me as a shrinking violet. His gentle demeanor masks in some ways the steely determination he has demonstrated in his years as a priest. He stood his ground when his fellow Jesuits wanted protection despite their involvement in a militarized version of Leonardo Boff’s Liberation Theology. Out of compassion, he worked behind the scenes to get them released by the Argentine navy. In doing so, he put his own neck on the line. As a pastor of his Jesuit flock, he well understood what drove his two young brothers to take up arms, but he could not condone their actions and thus encourage others to go down the path of violence.

John Paul II on a visit to Nicaragua in March of 1983, publically castigated the Cardenal brothers (both Jesuit priests) for their participation in the activities of the Sandinista junta which did nothing to hide its Marxist atheism and disdain for the church. Cooperation with violent people who would liberate of the poor and the oppressed too often encouraged members of the clergy to overlook or even participate in a violent response to the repressive military regimes.

In the movie Romero, the Archbishop of neighboring El Salvador, came upon one of the priest-revolutionaries who was brandishing a rifle and wearing an ammunition belt. “How,” Romero asked him, “are you any better than them in taking up arms?”

Pope Francis earned the ire of the current Kirschner government of Argentina for having the temerity to publicly castigate the government’s efforts to marginalize the unborn and those who would espouse the Church’s teaching on the sanctity of marriage.

As Dr. Mullholland noted in an earlier post in this Gregorian Blog, the new Holy Father is encouraging all of us to be the forwards (strikers…in the soccer analogy) with courage to evangelize the culture. Not just clergy and popes should pray for courage and wisdom.