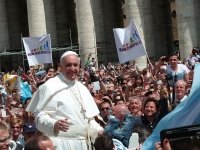 Pope Francis grabbed headlines with the publication of a long interview yesterday. The superficial analysis has been done. Let’s go a bit deeper.

In the film “A Beautiful Mind,” John Nash doesn’t go to classes or do homework. As a grad student in math at Princeton, he doesn’t want to live grad school business as usual. He wants to find something deeper, something wide-ranging, a discovery that will make history. He is searching for a “governing dynamic.” The one paper he wrote in grad school formed the basis of his Nobel Prize winning game theory. (Of course, he also goes a bit crazy in the process. And the faithfulness of his wife throughout is the real charm of the film.)

Surely you have read the pope’s interview. If not, go do it. Now. Maybe you have read the secular press speculation about a lot of what the pope said. Don’t believe most of it. In general, don’t listen to what other people say about your parents. Be a true son or daughter and listen to them directly.

Fr. Zuhlsdorf has done a great job of getting deeper into the interview. He nails it in one sentence: “Francis’ pontificate is going to be about evangelization and putting a motherly face on the Church.”

I want to take one more step. What does it say about Pope Francis’ mind? Well, it’s a beautiful one, and it’s a fatherly one. That’s what pope means, right? Papa… dad!

He speaks a great deal about discernment, as a great gift of the St. Ignatius to the Church. He is taking things slow. It certainly hasn’t been business as usual in Rome, and Francis says he has not spoken about certain things on purpose, even though he has taken flack for it (like John Nash not handing in home work.) What is he waiting for?

One of the most overlooked lines in the interview may be one of the most important: “We must not focus on occupying the spaces where power is exercised, but rather on starting long-run historical processes.”

What does this mean? It means that Francis, in his heart and in his beautiful mind, is discerning a foundational dynamic. He wants to start a long-run historical process. He wants to do this, very possibly, because he sees the long-run historical process of modernity in crisis. This is something the Church discerned during the Second Vatican Council. Francis is not about trying to win a shouting match with the world about moral issues.  He wants to start a process that will last centuries.

And that process starts with putting things in order. Francis may irk conservatives by not seeming to care much about an order of doctrines or addressing moral concerns in order of absoluteness. The reason is that, as a pastor, as a father, there are no abstract questions, there are only souls to save. That is why Francis is more concerned about homosexuals than he is about homosexuality. And he says God the Father is, too.

The pope knew this interview was going to make a splash this week. So last Sunday in his Angelus message he spoke of the Church as Mother who listens, who waits, (who discerns, we could say,) and who prays unceasingly.

No mother whose son has fallen into drugs says “My son the drug addict.” Drug addiction is not some abstract issue to be confronted, nor is it her son’s identity. It is something that has stolen him from her and which prevents him from being the fullness of himself, from living out the full truth of who he is. It is an abstacle to his ultimate fulfillment and happiness. That is how Francis addresses moral issues. And it is very important.

At the beginning of the interview, he spoke of why he didn’t want to live in the Apostolic Palace. It was a narrow door with a big space. He says, “like an inverted funnel.” He likes open doors and narrow spaces.

That is Francis, and that is the dynamic he wants to start establishing in the Church.  We must start with a proclamation of Christ, of what He has done in our lives. Catechesis and moral doctrine come after that. In our Faith, a “no” is always in service of a yes. We can’t teach people “no” until they understand the yes. God didn’t give the Commandments until after He saved them from Pharaoah.

It is not a question of wanting the world to say “Ok, you’re right, abortion is wrong.” With that we win an argument. It is about healing souls. He calls the Church a “field hospital.” Academic debates about disease are not prevalent in field hospitals. It’s triage and saving lives. And it’s not because those debates are not relevant, it’s a matter of urgency and emphasis.

Read the interview again. Keep the deeper issues in mind. Don’t look at it like a lobbyist to see if your pet issues, be they righty or lefty, gained any yardage.

Pope Francis is the Universal Pastor of all Christians. He is slowly looking for, and slowly finding, a long-run process to set the Church upon for decades. And his doing so is a proof of the fidelity of the Church, Mother and Teacher.

A mother draws a child tightly to her heart, but only after a wide-armed embrace.

This is going to be one mother of a pontificate.