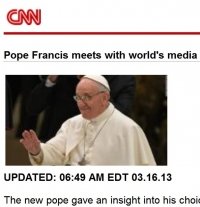 CNN and many others covered the meeting.

Pope Francis met with members of the media today, March 16.

What the media wants from a Pope is no secret: They want a good story. They want news – something that hasn’t been reported before. And they want controversy. What the Vicar of Christ wants from the media is pretty straightforward, too: He wants more people to repent and follow Christ.

Pope Francis gave them what they wanted, but cleverly got what he wanted, too.

First, he referred their enthusiasm about the “Pope story” to its source: “Christ is the center, not the Successor of Peter … Christ is the reference point at the heart of the Church, without Him, Peter and the Church would not exist.”

Then, he gave them a great tidbit, something new: An inside story of his being chosen and picking a name.

He noted that people still didn’t know which St. Francis he had named himself after: Xavier, de Sales or Assisi.

“When the matter became dangerous” in the conclave, he said, Sao Paolo Emeritus Cardinal Archbishop Cardinal Claudio Hummes was a great personal support. “He comforted me.” When he was elected, the cardinals began to applaud. Cardinal Hummes “embraced me and kissed me and said: ‘Don’t forget the poor’… and that struck me … the poor … Immediately I thought of St Francis of Assisi … Francis was a man of peace, a man of poverty, a man who loved and protected creation.”

So now we know.

He added a note of controversy, too. “How I would love a Church that is poor and for the poor,” he said. (Don’t tell the media that this is just the Beatitudes!)

The Holy Father also gave the media something they might not be expecting: a lesson in their vocation. He told them about the “trinity of communication: Truth, Goodness and Beauty.”

Gregorian readers will be familiar with this concept, since Dr. Mulholland posted two days about Cardinal Bergoglio’s thoughts on the matter. But now the words are the Pope’s:  “We are not called to communicate ourselves, but this trinity … the Church exists to communicate Truth, Goodness and Beauty.”

This is brilliant. These are exactly the things the media wants to communiate, too. And to the extent they do, they will be doing what the Church does: Leading people closer to the one who is Truth, Goodness and Beauty incarnate.

Last, Pope Francis imparted his apostolic blessing. He did it in silence, though, because he said “not everyone present belongs to the Catholic faith and others do not believe. I respect the conscience of each one of you, knowing that each one of you is a Child of God. May God bless you.”

Again, this is standard Catholicism. Every day God sends his sun and rain to the just and unjust, and leaves their response up to them. But to see it in the Pope just may have won hearts in a media whose members have built a wall of defenses and false expectations in between themselves and the Church.