Pope (George Mary) Francis:  How his names reveal his vision 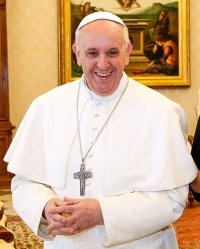 Jorge Mario Bergoglio is now better known as Pope Francis.  An hour after we saw him on the balcony, asking for our prayers for him as Pope, I wrote that the three keys to this pontificate would be humility, reform and evangelization.  After six months of homilies, travels and surprises, I stand by my statement, but one can always go a bit deeper. (Thoug I was wrong when I assmed part his reason for choosing the name Francis was due to fellow Jesuit Francis Xavier.)

Our Holy Father is a rooted fighter who, with patient, persevering love, inspires, evangelizes and reforms by example.

Jorge (George) is a name of Greek origin that means “farmer, worker of the earth.”  Pope Francis is close to his working class roots. He spoke of them in Cagliari this morning. He is close to the struggles of those who toil to find work, keep work, and try to bring a family forward by making ends meet. In the recent headline grabbing interview, he defines himself first as a sinner. He is no stranger to the sweat that is a punishment for sin.

But George is also a legendary saint who slew a dragon. And Pope Francis is a fighter.  His words call us back to Christ and away from the enemy of our souls, who is the enemy of our own happiness.  He knows this fight is not in the abstract, but in the everyday, and that it is a spiritual battle with powers greater than our own. George slew the dragon by the power of God, not the power of George.

But George is also Mario (a masculine form of María, Mary). Pope Francis is Marian by birth and by baptismal consecration. He leads a Church that is embattled and called to be militant, but whose model is Mary. The Pope fights like a mother who prayers for her children, who toils for them, who waits for them with patience, who swallows her own pride if need be and doesn’t think twice to welcome them back. Mary prayed in the Upper Room with St. John who was at the foot of the Cross with her, but she also embraced and comforted the other apostles who had run away.

In his homily today in Cagliari, he spoke of Our Lady and St. John, saying: “In John we’re all here, too, and Jesus’ look of love entrusts us to the maternal guardianship of the mother. Mary will have remembered another look of love, when she was a young girl: the gaze of God the Father, who had looked upon her humility, her littleness. Mary teaches us that God does not abandon us, [that God] can do great things even with our weakness.”

His vision for the Church is one where the face of a mother emerges, bringing us close to her Son. Mary is the first to share the Good News, when Jesus was an Unborn Babe. Our first task as a Church is to proclaim the greatness of the Lord and to rejoice in God our Savior. All else must flow from that.

And Jorge María, when he felt the Holy Spirit calling him in the votes of his fellow cardinals, chose the name Francis. This name evokes poverty, and also a way of reforming the Church that is humble, from the inside, a renewal that focuses on what is essential and where example takes precedence over words.

Today is Francis’ second trip within Italy, and both have been to outlying areas. Both are islands. One was an island where refugees have suffered shipwreck. Today, an island in a dire employment crisis. He goes to say that the Church is with you, you who suffer, to wash your feet and get you back on your feet. And the Church is there to roll up her sleeves and work with you. She speaks your language (Francis ended his homily in the Sardinian dialect) because love and acceptance is what we all long for and that for which we were created.

When St. Francis went to Rome to have his ragtag order approved, one of the cardinals is rumored to have said, “We either approve these guys or throw out the Gospel.”

His simple, humble, back-to-basics approach is refreshing in its simplicity but unremitting in its demands.

His homily this morning says “I have come among you, indeed we have all come together, to meet the gaze of Mary, because there, there is something like a reflection of the gaze of the Father, which made her the Mother of God, and the look of the Son on the Cross, which made her our Mother.”

Our heart longs for the gaze of our Father in Heaven, and the Mother Jesus gave us. But it is a demanding thing to meet that gaze, a gaze full of mercy but which calls us out of ourselves and out of our comforts, calling us to look upon everyone we meet with that same gaze of love, sacrifice and mercy.

Imagine St. Peter meeting Mary’s gaze after denying her Son and abandoning Him to his torturers. And imagine her gaze towards him.