Pushy versus Pulley: Fatherhood and the Gospel of Life 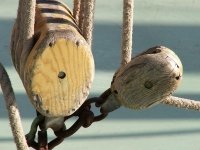 How many times have you heard someone say “His father really pushed him too hard?”  A simple Google search of the phrase reveals thousands of articles referring to men as different as Shakespeare, Mozart and Floyd Mayweather, Jr., all with pushy dads.  Many of us dads struggle with the perfect formula. How much do you push?

After reading Pope Francis’ homily today, I’m thinking I may have put the horse before the cart, or the kid before the dad. It’s less about being pushy and more about being a pulley.

The Year of Faith celebrates the Gospel of Life as we Americans celebrate Father’s Day.  At the Vatican, a special mass was celebrated to thank God for the blessings of life, taking its name from Evangelium Vitae, Blessed John Paul II’s landmark encyclical. Italy celebrates St. Joseph’s Day (March 19) as Father’s Day, so there was no particular reference to fathers in the Pope’s homily. But one of his points provides an excellent reflection.

The first reading speaks of David’s sin and his indirect killing of Uriah (the Hittite, not Uriah Heep, the Dickens character or the metal band.)  He puts his army in danger just to knock off Uriah, since he had already knocked up his wife Bathsheba.

Pope Francis says, “Whenever we want to assert ourselves, when we become wrapped up in our own selfishness and put ourselves in the place of God, we end up spawning death.”  Sounds like a pushy father to me.  How often do I have my plans for my children, I want things done my way, and by pushing for this, I end up breaking my relationship with them?  For me, too often.

Speaking of God the Father, Pope Francis, calling God “the living One” shows how God is merciful, always drawing us towards Himself. Even his commandments are not nagging NO’s, but affirmations: “The commandments are not a litany of prohibitions – you must not do this, you must not do that, you must not do the other; on the contrary, they are a great “Yes!”: a yes to God, to Love, to life. Dear friends, our lives are fulfilled in God alone, because only he is the Living One!” (Wishing to nail the point home, the pope made his audience repeat three times that “God the living one, is merciful!”)

The Gospel of the woman anointing Jesus’ feet brings this idea forward. Jesus recognizes her love and forgives.  He doesn’t take that moment to give the laundry list of everything she has done wrong, or the ways she has disappointed him. “Jesus is the incarnation of the Living God, the one who brings life amid so many deeds of death, amid sin, selfishness and self-absorption. Jesus accepts, loves, uplifts, encourages, forgives, restores the ability to walk, gives back life. Throughout the Gospels we see how Jesus by his words and actions brings the transforming life of God. This was the experience of the woman who anointed the feet of the Lord with ointment: she felt understood, loved, and she responded by a gesture of love: she let herself be touched by God’s mercy, she obtained forgiveness and she started a new life.”

I have to take time today to think of how I can do that better for each of my children. Do they truly feel understood and loved? Do I lack mercy by bringing up their faults, am I being pushy by living out my own frustrations and shortcomings and failures in their lives? Or am I living out my faith in such a joyful way that it doesn’t push them, but draws them? Is my merciful love for them helping them want to live up to expectations which are God’s, not mine?

My own dad pushed me in some ways, but was much more effective when he pulled. A mostly self-taught man, he got a high school equivalency in the Navy and still makes his PhD son feel like he isn’t reading enough. But he doesn’t badger me about it, he just shares what he is reading and that example is enough. We’ve also discovered over the years that it’s ok if we don’t read the same things. It allows us to take greater joy in the things we do find in common. So thanks for being a pulley about that and other things, Dad.

Back to God the Father. I remember an English poet, George Herbert, who had been a Member of Parliament (hmm, just like his dad had) and who wasn’t happy until he took orders as an Anglican priest at age 37 and settled in a small parish church far from the hustle and bustle of London. They were happy years, but few, for he died of tuberculosis within three years, in 1633. He gave a friend a book of religious poems he had penned, which was published after his death.

One of them shows better than any other how our God is not a pushy father, for He has put within us a homeing beacon.  It is a beacon which beckons. And no one can come to Jesus, “unless the Father beckons.”

On this Father’s Day, please pray for all dads to be less pushy, and more like our Father in Heaven, whose Gospel of Life draws us to true freedom. Let’s be pulleys!

The Pulley, by George Herbert

When God at first made man,

Having a glass of blessings standing by,

Contract into a span.”

So strength first made a way;

When almost all was out, God made a stay,

Perceiving that, alone of all his treasure,

Rest in the bottom lay.

“Bestow this jewel also on my creature,

He would adore my gifts instead of me,

And rest in Nature, not the God of Nature;

So both should losers be.

“Yet let him keep the rest,

But keep them with repining restlessness;

Let him be rich and weary, that at least,

If goodness lead him not, yet weariness

May toss him to my breast.”