Putting Bread on the Table 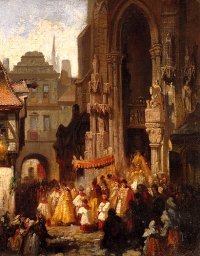 This past weekend we celebrated the Solemnity of Corpus Christi. The Holy Father led the world in an hour of adoration. The whole world, adoring Christ together! The experience was, in the aptly chosen words of the Ave Verum, a “foretaste”  (praegustatum) of heavenly rewards.

Pope Francis spoke about the Eucharist being something we celebrate with Christ but also with each other.  As I walked along in a Eucharistic procession at St. Benedict’s Abbey, as Abbot James Albers, and later Fr. Gerard Senecal and Fr. Gabriel Landis held the monstrance, I reconfirmed my faith in the Eucharist and also in the Church, this community that gathers around the Lord ’s Table.

For my family I am, in the hackneyed phrase, the “breadwinner.”  But I am not the only one who works. For my family to function, everyone’s effort is needed, from the youngest setting out the napkins for dinner to the garbage-taker-outer. My wife carries the heaviest load of work around the house. My work outside the home, often less frustrating than hers within the home, just happens to earn money. But many kinds of work are necessary for the home to function.

Someone had to bake the bread and make the wine that were used at the Last Supper.  That Supper was united to Christ’s sacrifice. Christ hosted the meal, but was also the Host in another, more deeply theological sense. He was the victim sacrificed.  Our Mass taps into the eternal aspect of Christ’s self-offering, in the Last Supper and on the Cross. It is more essentially a sacrifice than a family meal, since the meal would not be special without the sacrifice (nothing special about an anniversary dinner without the anniversary), but at Mass, we re-live both Holy Thursday and Good Friday.

Jesus, whose human nature is united to the divine nature of the Second Person of the Trinity, confers eternal value upon all that He does. And yet, He allows us, poor, mortal, sinful, capable-of-nothing-without-Him creatures to have a role in his greatest miracle.  As He redeemed us upon the Cross, shedding his blood, his mother Mary was there, and John, his faithful disciple, and holy women, and even some who followed Him secretly, at a distance.

It is Christ who pays our infinite debt (He is the “satisfactory and meritorious” cause of our salvation.) But we, the Church, are the Bride of Christ. We have a job to do as well, which is largely passive, since we must allow Christ to redeem us, and to accept his call with all that it implies.

Our work is useless unless united to His. But it is still necessary for our souls.

As Pope Francis asked in his Corpus Christi homily, “Let’s ask ourselves this evening, adoring Christ, really present in the Eucharist: Do I let myself be transformed by Him?”

There is no sacrifice if there is no offertory. There is no multiplication of the loaves if there are no loaves. I once told a priest that sometimes at Mass I didn’t seem to get anything out of it. He asked me how much attention I paid to what I was bringing to it.

As we put our contribution in the offering plate at Mass, we should think that we are uniting the efforts and toil of our entire week to the sacrifice of the altar.

It is a family meal at home, not a restaurant. We are not merely being served.

In the Eucharistic Feast, Christ is the breadwinner, but we must lay out the napkins.